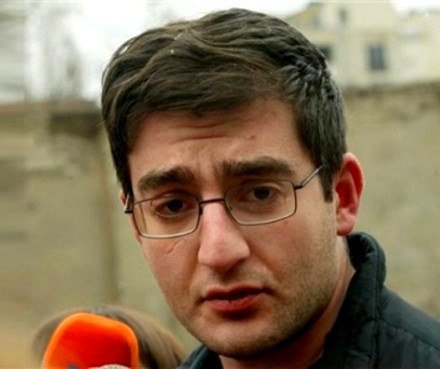 TBILISI, DFWatch–The Tbilisi mayor defended his conduct in the tree-felling scandal at an extraordinary City Council meeting Friday but had to halt his speech because of interruption by protesters.

Environmentalists claim Mayor Davit Narmania is allowing healthy trees to be taken down to make room for apartment blocks in an expensive district of the capital.

At least 40 trees were cut last week on Kazbegi Avenue, a lucrative part of the capital popular among Westerners, in a city that badly lacks amenity planting.

Protesters accuse Mayor Davit Narmania of having allowed healthy trees to be felled, in violation of the law. The rules say that only sick trees may be felled, but the building company claims it had the required permit from the ecology and greening department of City Hall, which considered the trees sick.

Narmania has ordered a probe into the tree-cutting and says he cannot accommodate the protesters’ demand — to restructure the greening department and fire its head — until the probe is completed.

On the spectator’s gallery during the extraordinary City Council meeting were several activists for the former ruling party the National Movement, as well as Tsotne Gamsakhurdia, son of the former president Zviad Gamsakhurdia.

He verbally attacked Narmania, accusing him of using the probe to delay the process and distract the public’s attention from the problem.

In the heat of the the shouting match which developed, a brief scuffle took place between him and security guards.

Narmania had to break off his speech for several minutes, but later resumed.

Afterward, Gamsakhurdia told journalists that the mayor was “pulling the wool over the public’s eyes” and “telling fairy tales.”

In May, Mayor Narmania was interrupted by protesters and called an ‘enemy of the city’ for allowing a part of Tbilisi’s botanical garden to be sold and approving the massive luxury complex Panorama.