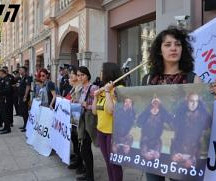 TBILISI, DFWatch–Environmental activists interrupted a speech by Tbilisi Mayor Davit Narmania on Tuesday during a session of the City Council, accusing him of being an ‘enemy of the city’.

The activists protested the recent selling off of a part of the city’s botanical garden, which they think Narmania approved, as well as a massive infrastructure project called Panorama.

The mayor ordered the guards to escort the activists outside.

Narmania appeared in order to answer questions from council members related to Panorama project. After the session, he said that he is ‘entirely confident’ that the project has to be carried out and the decision won’t be amended.

“The council received all the necessary answers,” he said.

He claimed the activists interrupting his speech was part of a ‘political show’.

Members of the National Movement left the session as a sign of protest. They said they did not hear specific answers to the questions they had.

“Mayor did the best to avoid addressing the problem of the botanical garden,” council member  Irakli Abesadze said after he left the hall.

Activists wanted to attend the session, but they were not let in after the guards forced them out.

Tbilisi Mayor defended the selling of a part of the botanical garden without notifying the public in advance. He said there was a plan to sell the land, but former Prime Minister Bidzina Ivanishvili purchased it in order to save it from urban development.

Activists from Guerilla Gardening and other organizations have protested against the Panorama project for months, as well as the controversial deal about Botanical Garden.

A week ago, several activists were detained and fined during a protest.