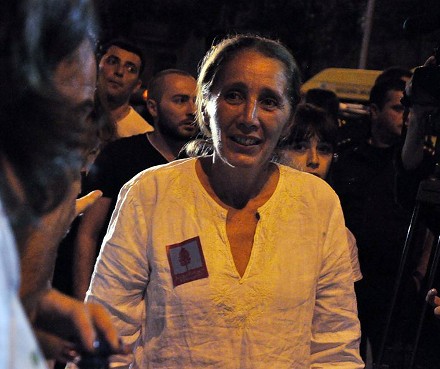 TBILISI, DFWatch–The Guerilla Gardening group is continuing their protest outside City Hall against the recent tree-cutting in the capital.

One of the group’s leaders was hospitalized on Wednesday after being on hunger strike for seven days, but she was replaced by another activist. The protest has now lasted for more than a week.

The protesters want the head of City Hall’s ecology and greening department and her deputy to resign and to restructure the department.

The protest began when at least 40 trees were cut on Kazbegi Street in Tbilisi to make room for two new apartment blocks.

Nino Sulkhanishvili, head of the ecology and greening department, claims that they gave permission to cut 45 ‘diseased and very dry’ trees, but the construction company wanted to cut 68 trees.

But the eco-activists claim that healthy trees were also cut and complained to the prosecutor’s office, which launched an investigation into the tree cutting on Kazbegi Street.

Tbilisi Mayor Davit Narmania said he will consider dismissing Sulkhanishvili and her deputy after the investigation is over and promised to revise and improve the tree cutting policy.

Mariam Bakradze from Guerilla Gardening told DFWatch that if their demand is not met they will continue protesting.

She says that the greening department has to be restructured and must include a civil council which can participate in decision making.

The plan is to build two multi-storey residential buildings on Kazbegi Street, at the site of an old blood transfusion institute. The trees were cut on August 17.

At the time, Aleko Elisashvili, an independent member of Tbilisi City Council, said at least 12 healthy trees were cut.

Nata Peradze of Guerilla Gardening, the first to go on hunger strike, said rare species of silver spruce were cut; trees that are not only decorative but also precious plants from an ecological point of view.

After Peradze started her hunger strike, the conflict attracted more attention and the mayor announced a ten day moratorium on cutting trees in the capital.