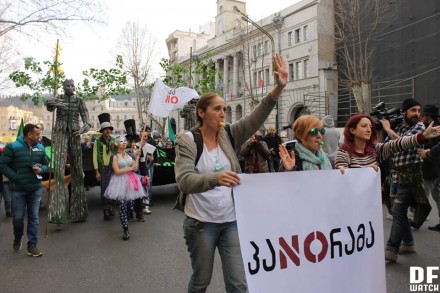 Up to 400 activists gathered on Tbilisi’s Freedom Square on 27 February in order to protest against the construction of Panorama Tbilisi above the Old Tbilisi and Sololaki.

The protest was organised by a coalition of more than twenty organisations and social movements called Ertad (‘Together’). The activists marched from the Freedom Square to the State Chancellery holding posters saying ‘PaNOrama’, extending arms with the word ‘No’ written on their palms.

Panorama Tbilisi project is managed by the Georgian Co-Investment Fund, which was established by businessman and former prime minister Bidzina Ivanishvili in 2013. Mr Ivanishvili appears to be so far the only investor in the project, whose worth is estimated at 500 million dollars.

‘We gathered today in order to protest a project that will ruin this city. This project’s scope is so large that it will influence the whole city. It doesn’t take into account urbanisation issues, social aspects, environment protection, or protection of cultural monuments. The City Council’s aim is to achieve gentrification — a phenomenon which is destructive to the non-élite segment of the society. Economically unprivileged people in the area will be forced to move to the outskirts’, Nika Tsikaridze, activist for Green Fist told DF Watch.

‘The Panorama project is a gross violation of the will of Tbilisi’s residents. It doesn’t only harass the old city’s cultural heritage, but it’s also a “one-man project”. We all know who’s standing behind it. We don’t want to sacrifice our city to one man’s weird phantasies’, Khatuna Gvelesiani from Iare Pekhit (‘Walk’) told DF Watch.

‘This project will significantly damage the old part of the city. It is also a project which is clearly done for certain people’s business interests, not for the sake of the citizens’ well-being. We’re protesting not only against this one project, but also against everything that has been going on with the urban development — or “undevelopment” — in Tbilisi. We have no recreational zones, all the squares are being taken down for residential buildings, churches, restaurants. We have no green space and no space for citizens to even gather’, Natia Gvianishvili, director of Women’s Initiatives Support Group told DF Watch.

The main opposition party United National Movement (UNM) has suggested that the Tbilisi City Hall has recently appointed a number of officials who used to be employees at Mr Ivanishvili’s Cartu Bank, which raises questions about a possible conflict of interests regarding implementation of infrastructure projects related to Panorama Tbilisi.