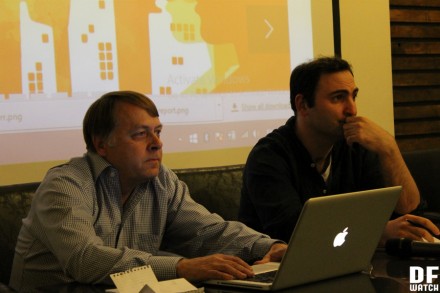 ‘It doesn’t necessarily mean that these people had anything to do with offshore… Anyone’s name can show up in this database. It’s a database without a brain’, Dave Bloss (left) from OCCRP Caucasus explaines.

Global launch of the Offshore Leaks database revealed names of eighty-five Georgian citizens, some of who might potentially be implicated in illegal financial activities.

On Monday, 9 May, an event organised by the Organised Crime and Corruption Reporting Project (OCCRP) Caucasus celebrated the global launch of the Offshore Leaks database prepared by the International Consortium of Investigative Journalists (ICIJ) based on data on almost 320 thousand offshore entities found in the Panama Papers.

The database doesn’t give access to the actual documents, although it reveals names and ID numbers of people and their networks of connection to offshore entities.

The latest release was accompanied by the publication of eighty-five Georgian names which figure in the database in connection to offshore companies.

‘It doesn’t necessarily mean that these people had anything to do with offshore’, Dave Bloss from OCCRP Caucasus explained.

‘If someone wants to open an offshore and they’re classified as a PEP — “politically exposed person”, which means that they at some point had anything to do with politics — the legislation of these countries requires a deeper background check of these persons before a company can be created for them. One of the things they do is to Google search the PEP’s name. If a journalist wrote a story about this person, it is possible that the journalist’s name will also show up on this list, which is simply a scan of names from 2.4 terabyte data. Anyone’s name can show up in this database. It’s a database without a brain’, Mr Bloss said.

Davit Kezerashvili was a high official in the UNM’s government and a former minister of defence. He is wanted by the Prosecutor Office in connection to a number of crimes, including exceeding official authority, appropriation of a company, and embezzlement.

Ivane (Vano) Chkhartishvili was a minister of economy in 2000–2001 during the presidency of Eduard Shevardnadze. His name has been connected to several corruption cases.

Koba Nakopia was an MP representing United National Movement in the previous parliament. He was named as a producer of 5 Days of War, a 2011 action film by Renny Harlin dedicated to the Russo–Georgian war of 2008.

The list also includes names of attorneys. The sole fact of being present in the list doesn’t imply any criminal activity.