Saakashvili pressured TV investor: ‘You are a smart Jew’

Saakashvili pressured TV investor: ‘You are a smart Jew’ 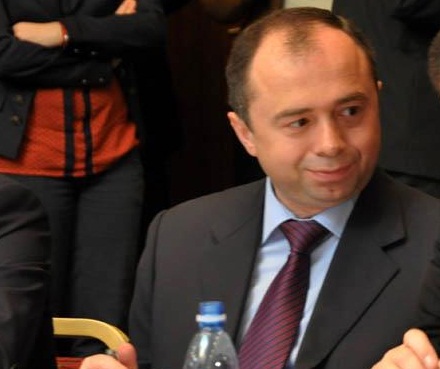 Chief Prosecutor Archil Kbilashvili says he may want to question Saakashvili about the takeover of Imedi TV. (DF Watch photo.)

TBILISI, DFWatch–President Mikheil Saakashvili may be asked to give testimony as a witness in the case about the takeover of a TV station.

The reason is that an investor who played a key role in bringing Imedi TV under his government’s control in 2008 said he was forced by Saakashvili to hand over his shares. Investor Joseph Kay has further testified that the president used an antisemitic slur while putting pressure on him.

Imedi used to be owned by Badri Patarkatsishvili, but when he died in January 2008, a distant relative, Joseph Kay, appeared and presented documents proving that the deceased businessman had given him management rights to the TV company.

The family of Patarkatsishvili claimed that the document was falsified and demanded to restore their ownership of the TV station, but with the help of the Georgian courts, Kay, and through him, the Saakashvili government, kept control over Imedi.

After the United National Movement was defeated in the parliamentary election in 2012, ownership of Imedi was returned to the family of Patarkatsishvili.

Friday evening, Chief Prosecutor Archil Kbilashvili said during a talk show on Imedi that Kay has given a testimony which explains that the management issue of Imedi was agreed with the Georgian president, after they personally met to agree on ‘those issues’.

“It is possible that along with the investigation to reveal those issues, the Georgian president might be invited as a witness,” Archil Kbilashvili said, adding that there was a phone call in December between Kay and Saakashvili, when they decided to give away TV Imedi.

According to Kay’s testimony, he gave away the TV company’s shares under threat. December 16, 2008, he was in Tbilisi, when he got a nightly phone call from Defense Minister Davit Kezerashvili who asked him to come to his office. Kezerashvili told him that he had to give away his shares, otherwise he would not leave that room. It would be better to be friends with the government, the defense minister is to have said.

The president’s spokesperson Manana Manjgaladze said Saturday that the prosecutor’s statement is ‘a dirty lie.’

“It is completely obvious that this is not a just process and it doesn’t fit any legal frames,” she said. “This is a political order. It is hard to talk about cohabitation while the other party uses such methods.”