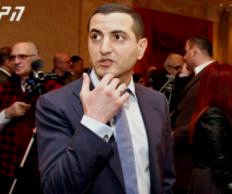 TBILISI, DFWatch–Georgia’s Prosecutor  General’s Office on Thursday charged a former defense minister with appropriation of property from private persons during his time in office.

The Prosecutor General’s Office said Davit Kezerashvili in August, 2010, used his position as minister to expand his influence over business and appropriate a company involved in processing of oil products and dry goods in Poti Port. This would bring him benefits worth tens of millions of annually.

In that period, the owners of this business were a father and son, Tamaz and Zurab Nizharadze. They owned Bimedia Investments Limited, which was involved in the reloading of goods from ships to wagons, based on an agreement with Poti Sea Port Corporation – Investments Limited. The agreement was signed for a duration of ten years.

The two were also part owners of Mission Investment Limited, which had exclusive rights to processing oil products in Poti Port and had income from this activity.

Tamaz Nizharadze in 2010 owned 52.5 percent shares in Metalex Ltd, which from 2003 to 2008 had leased the number 5 berth in Poti Port and was processing dry goods.

“This was the Nizharadzes’ business, which became of interest to Davit Kezerashvili. Based on this, on August 14, 2010, Davit Kezerashvili, in Tbilisi met with businessman Tamaz Nizharadze in the so called Pixel building and through violent threats categorically demanded that the company shares that were in the name of father and son to be transferred to his name,” the office informs.

In addition, from August 15, through August 17, 2010, there was placed a special operative group of Ministry of Internal Affairs in the house of Tamaz Nizharadze, without any legal basis, placed illegally, which obstructed Tamaz Nizharadze from free movement, conducted continuous surveillance, and exercised psychological pressure on the businessman.

In these days, Davit Kezerashvili had active negotiations, through an intermediary, about taking over the Poti Port business, with Tamaz Nizharadze, who was under surveillance of the special operative group, and categorically demanded from him to give up the company assets owned by him and his son, otherwise the law enforcement employees would not leave his house.

“As a result of violence and psychological pressure, a few days after the threats, Tamaz Nizharadze and his son Zurab Nizharadze gave up their shares in Bimedia Investments Limited (100%), Mission Investment Lmited (60.18%) and later on Metaleks(52.5%), which cost tens of millions of laris, free of charge, to Davit Kezerashvili’s companies Davor Holding Lmited, Axton Overseas Development Ltd and Steinlord Enterprises,” the statement reads.

In order to cover up the criminal act, an illegal contract was signed with Tamaz Nizharadze and Zurab Nizharadze included record about being paid USD 6,000,000 for their shares for two buildings. The pprice of Bimedia Investments Limited was confidential and the price of Metaleks Ltd was 1,050 laris. But they did not receive a tetri from this deal, investigators argue.

It is still unknown whether they will get back their property.

According to the Prosecutor General’s Office, the only way is a trial. Currently, the companies which Kezerashvili allegedly appropriated from them belong to another person.

The office has not named other witnesses so far, but they claim that the harassment and pressure on Nizharadzes is backed up by a witness.

The investigation continues, and if convicted, Kezerashvili may be jailed from four to seven years.

From 2004 to 2006, Kezerashvili was head of the Financial Police, and after that until December, 2008, he was defense minister, before he went into private business.

In February, 2013, he was charged along with former Mayor of Tbilisi Gigi Ugulava for appropriation of state money and money laundering. This trial is not finished.

In May, 2014, additional charges were introduced for alleged appropriation of state money.

Kezerashvili was acquitted of other charges, related to accepting a bribe of USD 12.3 million.

In February, 2014, France rejected Georgia’s extradition request for Kezerashvili, who is a citizen of Israel.