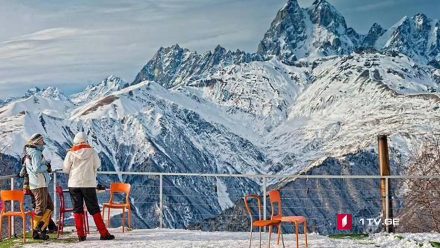 Mount Tetnuldi seen from Mestia, the capital of Svaneti. (1tv.ge)

TBILISI, DFWatch–Two women from Belarus have died and one survived with injures in an hiking accident in Svaneti, on the slopes of Mount Tetnuldi, a 4,858m high peak in the Greater Caucasus Mountain Range.

The three tourists, aged between 36 and 60, departed from a larger group en route to the camp and disappeared on Wednesday.

Rescue workers searched for them through the night and managed to locate all three in the morning. The bodies have been recovered.

The injured woman is being treated at the hospital in Mestia, the administrative center of Svaneti.