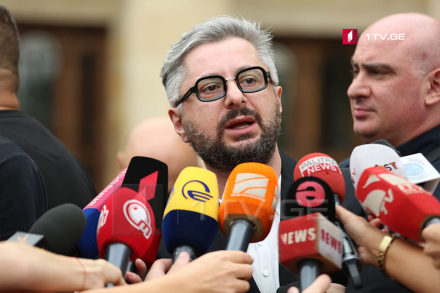 Initially, the Prosecutor’s Office wanted even stricter bail conditions: GEL 80,000 bail and banning the former head of Rustavi 2 from leaving the country.

Gvaramia claims the case is politically motivated and pledges not to pay even a lari.

If he doesn’t pay the bail money within a month, the prosecution may file another plea to the court demanding his arrest.

The hearing started on Saturday evening and the judge announced his decision at about 1:30 AM on Sunday.

Gvaramia was fired as director of Rustavi 2 a few weeks ago after losing a lawsuit over ownership to an allegedly government-backed investor. Often appearing on his own TV channel, he became known as a vocal supporter of former President Mikheil Saakashvili and critical of the current government and ruling party leader Bidzina Ivanishvili.

The opposition believes the corruption trial against Nika Gvaramia is politically motivated.

The leaders of various opposition groups have voiced their support for Gvaramia and accuse the authorities of political persecution.

The prosecutor’s office accuses Gvaramia of diverting millions from TV company Rustavi 2 to an advertising firm owned by his friends (see the press release in Georgian). If convicted, the former TV director faces several years in prison.

Gvaramia categorically denies the accusations and calls them nonsense.

He served as a member of parliament, minister of justice and minister of education and science under the presidency of Mikheil Saakashvili. For a brief period of time he also served as deputy prosecutor general. The last few years he worked as director of Rustavi 2 and was one of the most vocal critics of the current government.