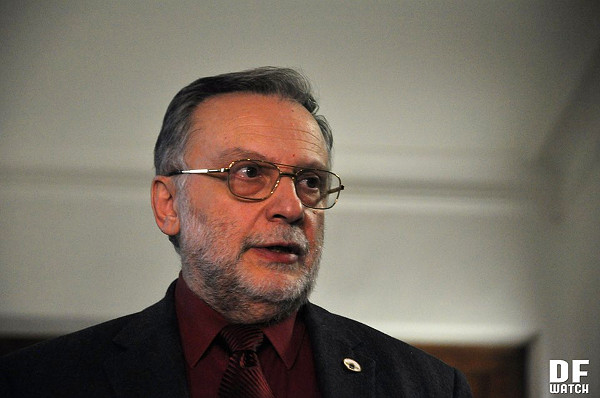 TBILISI, DFWatch–The academic council at Tbilisi State University (TSU) has started impeachment procedures against the rector after a meeting with members of the student’s union (Tvitmmartveloba).

Classes were resumed Friday at TSU after more than a week of conflict where the student’s union is one of the two opposing factions.

The impeachment of rector Vladimer (Lado) Papava has been the only demand put forth by the student’s union during the conflict.

The meeting between student’s union and the council was closed to the media. After it was over, members of the council stated that March 16, they voted to start a procedure to terminate the authority of Papava. One third of the council members supported the proposal – four members out of 13.

Council members explained that the decision to impeach Papava was made in a secret ballot and was passed by a majority of votes. There are currently 11 members left on the TSU’s academic council, as two professors from the Faculty of Social and Political Studies left.

Members of the student’s union will submit a document on Monday explaining to the council why they think that the rector has to be impeached.

The impeachment procedure has three stages. The first is to launch the procedure and the decision to do this was made on March 16. The next step is to hold an inquiry to study the activities of the rector. The final stage is to hold an impeachment ballot. The ballot is secret and the rector has to leave if a majority votes against him.

Vladimer (Lado) Papava told journalists after the council meeting, which he attended Friday, that the council is ready to start the inquiry and he is ready and aid in that effort.

“It is not true that there will be chaos after the rector leaves the university, because we have a plan,” President of student’s self-government told journalists after the meeting.

“When the rector announces that he is leaving, there will be named an acting rector and the university won’t be left without a head.”

Auditorium 116 left TSU in the evening of March 16. While they were leaving, the academic council meeting was being held at the same time and several student’s union members attended it for a while. When  the meeting was over it had not yet been reported that the council decided to consider launching impeachment proceedings against rector Papava. https://dfwatch.net/students-leave-tbilisi-state-university-after-nearly-a-weeks-sit-in-41018