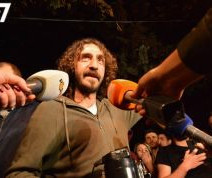 Beka Tsikarishvili, one of the spokespersons for the clubbers who protested. (Interpressnews.)

The youth launched the rallies after police raided two nightclubs as part of a crackdown on drug dealers following the suspected drug related deaths of several young people.

Nationalist and social conservatives, who are opposed to the lifestyle associated with the night clubs, staged several counter-demonstrations and tried to force their way through to the clubbers’ rally, while riot police kept the two sides apart by forming rows across Rustaveli Ave and the side streets around the old parliament building.

After negotiations inside the building, the interior minister appeared around 1am and pledged to investigate all cases of police brutality.

In order to prevent physical violence by far-right gathered nearby and holding counter-rallies in several locations, people from the Rustaveli rally were ferried away by yellow municipal buses.

Far-right tried to break police lines and sweep away rally dozens of times but hundreds of police officers managed to contain them and prevent direct clashes.

The neo-Nazi youth group Georgian Unity approached the rally scene on Sunday evening but was forced back by police.

Rally goers said they have given the government one week to keep its promise to investigate police brutality. Initially, the rally demanded the prime minister and interior minister’s resignation but later they seem to have moderated their demands, which also includes liberalization of the state drug policies, a long-running demands by a significant part of Georgia’s liberal youth.

The far-right groups, which included Georgian March and some other less known radical entities, have announced they will stage a large demonstration on Monday.

Sunday evening, at the peak of the standoff on Rustaveli Ave, the Patriarchate, the ruling body of Georgia’s Orthodox Church, issued a statement saying that the police raids ‘raised questions [but] the negative charge to the situation and the rationale for counter-rally was brought about by statements and behavior of a part of the youth gathered in front of the government palace.’

The participants at the rally were young Georgian clubbers and, generally, western-oriented liberal-minded youth who reacted to the brutal police raids against the popular nightclubs of Bassiani and Gallery Friday night. Their protest was not only against the physical abuse some of the club goers suffered at the hands police, but also the apparent social conservative sentiments that motivated the police raids, which were accompanied by a demand to shut down all nightclubs because they were a ‘nest of drug-dealing’.

Altogether eight persons, seven men and one woman, were arrested in police raids Friday night for ‘dealing narcotics’. The drugs police are trying to crack down on are presumed to be recreational drugs such as MDMA (‘Ecstasy’).

There have been several sudden deaths of young people in Tbilisi recently, presumed to be caused by recreational drugs associated with the club scene, which has grown in recent years and attracted some international attention.

70 demonstrators were detained over the course of the two day protests but later released; among them, Zurab Japaridze, leader of the libertarian political party Girchi, which has advocated the liberalization of marijuana.

The weekend’s events have exposed a deep divide in Georgian society, between liberal-minded youth and their social conservative or far-right counterparts. The events also brought to the surface a longstanding debate between defenders of “family values” on the one side, and human rights activism on the other, with the annual LGBTQ day May 17 coming up on Wednesday.