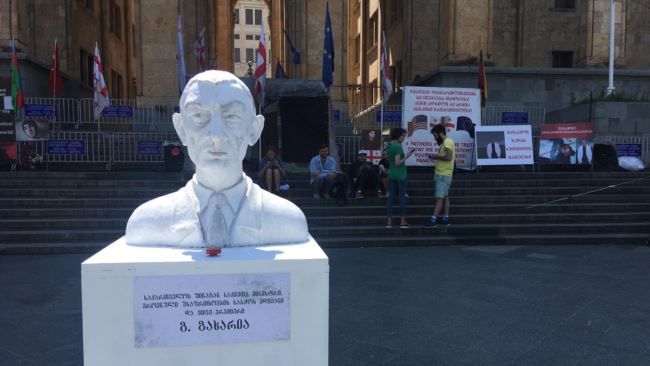 TBILISI, DFWatch–A satirical bust of Georgia’s interior minister was placed in front of the parliament building in Tbilisi on Sunday, on the anniversary of the controversial police raids of two nightclubs.

The statue’s pedestal was equipped with a red button, which if pressed made a voice say: “Let’s start with an apology.”

This is a reference to protests last year against heavy handed police action during a crackdown on two Tbilisi popular nightclubs, Bassiani and Gallery.

Minister of Internal Affairs Giorgi Gakharia said those exact words when he addressed one of the rallies in the capital in spring of 2018, which created headlines internationally and were dubbed a ‘rave-olution’.

Apart from the bust, the protesters also installed white banners throughout the city of Tbilisi poking fun at Gakharia, as well as the billionaire Georgian Dream chair Bidzina Ivanishvili  – referred to as an ‘oligarch’ – and the authorities in general.

The banners are emblazoned with Gakharia’s apology as well as  slogans like “Media Should Be Under Control”, “The Judiciary Should Be Subdued”, “More Surveillance”, “All Power and Rights to the Oligarch” and “No to Freedom”.