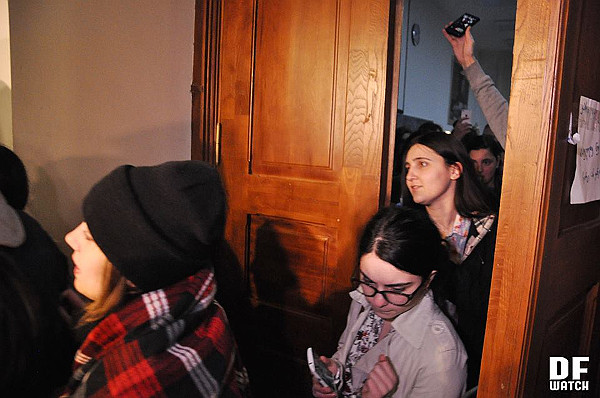 TBILISI, DFWatch–After a week-long student sit-in, teaching has resumed at the main building of Tbilisi State University (TSU), while the opposing groups continue to fight for their demands.

Friday, Professor Gogi Gogsadze at the Social and Political Studies Faculty of TSU resigned from the academic council, one of the main managing bodies of the university. Also Mariam Gersamia, a professor at the same faculty, left the council. As a result, the faculty no longer has any representation in the council. Gersamia said she wants to stand where the students are not divided, and that is the auditorium where she normally teaches.

“I will go there and read a lecture as a professor and not as a member of the academic council,” she said.

Education Minister Tamar Sanikidze criticized the their decision to resign and said it is important that the academic council fulfils its duties properly.
“If we forget what happened yesterday, and the day before yesterday, this can be bad. We won’t support this. It would be good if the academic council could discuss every issue, including the issue concerning the rector,” Sanikidze said.

Meanwhile, members of student government, Tvitmmartveloba, which is one of the confronted parties, have not changed their main demand, which is the resignation of rector Vladimer (Lado) Papava and held a meeting Friday with members of the academic council to discuss this issue.

Members of Tvitmmarveloba warn against taking ‘radical measures’ if their demand is not fulfilled, but they didn’t specify what they will do. Earlier, they announced that they would start a hunger strike. Sabauri told Liberali on Thursday that they are not going to do anything that will interrupt the education process.

“TSU’s Student Self Government, as well as Auditorium No 115, halted protests at the major building of TSU, to let the teaching resume, but our demand – that the [must] rector resign – is still in force,” the president of Tvitmmartveloba Shalva Sabauri said Friday morning.

He spoke of the possibility of cooperating with the protesting students and said there will be a dialogue, including legislative amendments. But Auditorium No 115 has so far refused to communicate with Tvitmmartveloba. A meeting is planned Saturday evening at the same auditorium to discuss future plans and consider whether to cooperate with Tvitmmartveloba.

“The major victory of the students is that we abandoned the confrontational background. We have different opinions, but we plan a dialogue in a constructive manner. The  dialogue will be sharp, but we accept this platform,” Sabauri added.

In an interview jointly with Radio Liberty and the Public Broadcaster, Deputy Education Minister Gia Sharvashidze said that the law on higher education allows the possibility for higher education facilities to decide what kind of Tvitmmartveloba to have.

“Universities can decide if it [Tvitmmartveloba] will have the form of a club, whether it will have any relation with the budget expenditure, etc. It wouldn’t be correct to interfere in this,” he said.

Sharvashidze said the government’s goal is that student become able to participate in management and decision-making.

Several professors who were on a hunger strike have now ended their protest. They supported rector Vladimer Papava and did not want him to resign.

After the protests were over, one of the professors, Izolda Tchiladze, said that they are temporarily halting the hunger strike. Some of the students from Tvtitmmartveloba still demand Papava’s resignation, but they agree on a constructive dialogue.

“I didn’t expect that our youth, particularly Tvitmmartveloba, cannot understand legal advice that the resignation of the rector doesn’t change anything; on the contrary, this makes the processes more vague. There is a possibility of total chaos, unorganized and unreasonable processes,” she said, adding that if there are radical measures in the future they will resume the hunger strike.

Members of Tvitmmartveloba did not like that Lado Papava confirmed that there are so-called ODRs (agents of the State Security Service) at TSU and didn’t inform about it in the past, or never asked the Security Service to remove their agents from the university. They claim Papava knew about the presence of ODRs at the university for three years and intend to present documentation that proves this to the council.

The first protest was held on March 7 by the students who are now using the name Auditorium No 115. They criticized the Tvitmmartveloba of misspending and say 24,600 laris meant for training courses was instead used for a trip to the winter resort Bakuriani. They also demanded the withdrawal of Giorgi Gaprindashvili’s candidacy for election of university chancellor. Gaprindashvili was accused of being close to the ODR agents. He was also seen as part responsible for pressures against students a few years ago, while he was a member of the Tvitmmartveloba. Gaprindashvili withdrew his candidacy, but the protests continued.