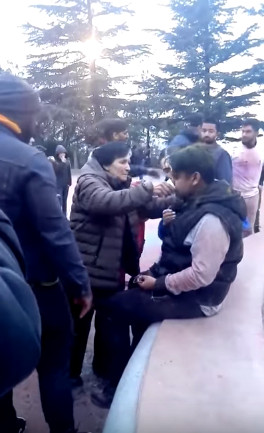 A video has surfaced showing a fight between groups of young men, with several young women watching.

In the video, one of the brawlers, presumably a Georgian, is seen hitting another man violently with an unknown object. Then he runs away.

Next, the video shows an injured man, possibly Indian, sitting at a fountain surrounded by a crowd, while another man, presumably a friend of the injured individual, is heard cursing in the Georgian language, with a heavy Asian accent.

Although his words are barely intelligible, it was assumed that he is saying “f**ck Georgians”, which quickly sparked an outcry in social media.

Several of the park’s security guards can also be seen present at the scene.

Beyond what is seen in the video, little is known about the incident, which reportedly happened during a celebration of the Holi festival.