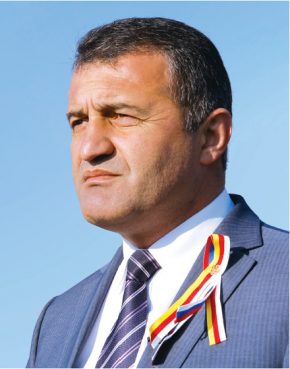 Anatoly Bibilov, a veteran of the 2008 war, has claimed victory in the election for new de facto leader of South Ossetia, a small Russian-backed breakaway region of Georgia.

TBILISI, DFWatch–South Ossetia’s de facto authorities have declared the election for a new leader of the separatist region valid.

According to latest news, assembly speaker Anatoly Bibilov is in the lead. He has already declared victory, but it is still not known whether he will get more than 50 percent, which he needs to win in the first round.

Bibilov (47) is a former military officer who served in the Russian peacekeeping forces in Tskhinvali before the breakout of war in 2008. In the war, he was a commander in the Ossetian forces in the battle for the city, for which he was later awarded the Order of Watsamonga by the de facto authorities.

Before the election, the incumbent de facto president Leonid Tibilov was lagging behind in the polls.

Bibilov tried to get election in 2011, but was soundly defeated by Alla Jioeva. However, the result was annulled by the court which scheduled a new election in which both the main candidates, Jioeva and Bibilov, were barred from participating. This paved the way for Leonid Tibilov, as a compromise candidate, to take over the presidency. Jioeva, who contested the court ruling and mobilized supporters for street protests, was made vice premier in the new government.

Along with the elections for new president, the de facto authorities also held a referendum about changing the name of the territory from only ‘South Ossetia’ to ‘Republic of South Ossetia – State of Alania’.

According to preliminary results, the vast majority voted in favor of the name change. The new name would more closely resemble that of neighboring North Ossetia – Alania, a constituent republic of the Russian Federation.

It has long been a popular notion in the politics of South Ossetia to ‘unite the two Ossetias’, but until a few years ago Moscow would not approve such a drastic move which would amount to annexing a part of Georgian territory. But with rising tensions between Russia and the West after the Ukraine crisis began, Moscow has taken bolder steps, signing a security pact and integrating the military forces. A referendum about outright joining Russia was planned for 2016, but postponed.