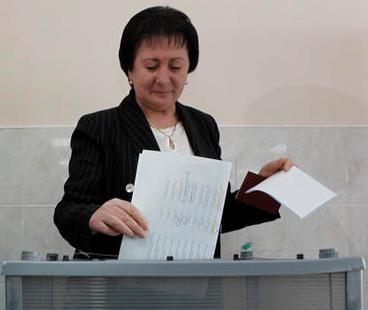 TBILISI, DFWatch – The South Ossetian opposition leader Alla Dzhioyeva calls off her protest and enters talks with the regime.

Dzhioyeva said that consultations between the opposition and authorities will continue, according to Russian news agency RIA Novosti.

On November 17 she withdrew from a compromise agreement and gave acting president Vadim Brovtsev until today to meet a list of demands, or else she would claim election victory.

After meeting with Brovtsev today, Dzhioyeva decided to call off the protest and continue talks.

“There was a constructive dialogue today, and we agreed with Brovtsev to continue it. Today is the first time I have heard the question: what are my suggestions to resolve the political crisis,” Dzhioyeva said.

Preliminary results gave the opposition leader a clear victory over assumed Kremlin favorite Anatoly Bibilov in in the November 27 run-off in the so-called presidential elections.

But after a complaint about violations, the Supreme Court of South Ossetia annulled the results and rescheduled a new election for March 25.

This caused Dzhioyeva’s supporters to launch a rally which created a tense situation until an agreement was achieved which involved president Eduard Kokoity, whose term had ended, stepping down sooner than planned, as well as the dismissal of three other officials.

After some hesitation, Dzhioyeva agreed and called off the protests December 9.

But later it turned out that the agreement wasn’t fully met by the authorities, after the elected assembly refused to dismiss the Prosecutor General and the Chief Justice of South Ossetia.