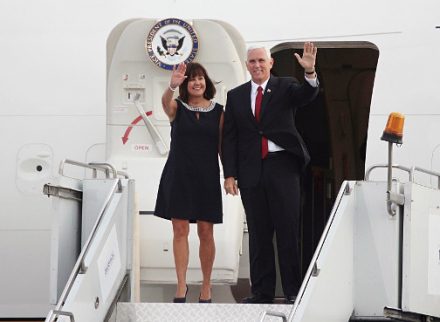 US Vice President Mike Pence arrived at Tbilisi airport Monday evening, accompanied by his wife Karen. (Photo published by the US Embassy in Tbilisi.)

TBILISI, DFWatch–US Vice President Mike Pence arrived in Tbilisi on Monday amid a US-led military exercise, which for a moment brought a US military convoy within close proximity of Russian troops stationed in the breakaway region South Ossetia.

Pence’s plane landed in Tbilisi at about 7:15pm. He and his wife were met by PM Giorgi Kvirikashvili and US ambassador to Georgia Ian Kelly, both accompanied by their spouses.

Pence’s visit to Georgia is part of his three day tour to Estonia, Georgia and Montenegro in a clear message to Russia that the change of power in the US has not affected its stance toward allies across Eastern Europe worried about Russia’s growing assertiveness.

The US troops and military equipment arrived in Poti, Georgia’s main port on the Black Sea, and traveled through almost the entire country to reach Tbilisi.

Driving along the motorway E60, an internationally significant route, the US military convoy on Sunday passed a section where the ‘border’ to occupied South Ossetia runs only about 350-400 meters from the main road.

The American armored convoy made stops in Kutaisi, Zestafoni, Khashuri, Gori and Tbilisi where locals met with the state flags of Georgia and the United States. People were given an opportunity to look at the military equipment and take memorable photos, the Ministry of Defense of Georgia stated, and published photos on its Facebook page. 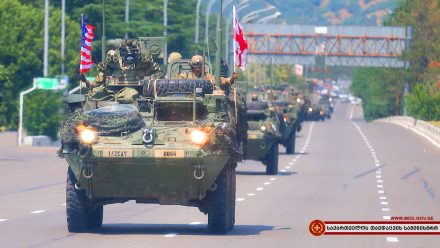