South Ossetia signs treaty on ‘alliance and integration’ with Russia

South Ossetia signs treaty on ‘alliance and integration’ with Russia 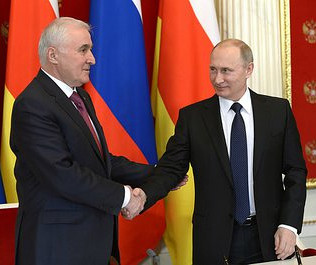 TBILISI, DFWatch–The leader of South Ossetia, a breakaway region of Georgia, was in Moscow on Wednesday and signed a new treaty on alliance and integration with Russian President Vladimir Putin.

Georgia, EU, NATO and the United States protested against the the new treaty, which has a time frame of 25 years and foresees cooperation in many fields.

“This is a document of strategic scope and historical significance,” the breakaway region’s president Leonid Tibilov said after signing.

Putin said the agreement is an important step toward further ‘strengthening the partnership’ between Russia and South Ossetia.

According to RES, the official government-run news agency in South Ossetia, the treaty foresees the formation of a  common space of security and defense between the two countries. It also involves free crossing of the Russian-South Ossetian border, the integration of customs bodies, the simplification of procedures for the acquiring Russian citizenship and a social component which includes pensions.

Merging with the North Ossetian Republic, within the Russian Federation, has long been a goal for many political leaders in South Ossetia.

“I think that soon we will witness the entry of South Ossetia into Russia,” RES quotes de facto Vice-Speaker of Parliament Dmitry Tasoev saying.

Georgia’s Foreign Ministry said in a statement on Wednesday that it condemns the signing of a treaty directed against the sovereignty and territorial integrity of Georgia, which constitutes the ‘factual annexation of the occupied Tskhinvali region.’

“Russia’s policy vis-à-vis Georgia, coupled with the alarming developments in the region illustrates that Moscow does not accept the independent choice of sovereign states and strives for the restoration of zones of influence in the region, including through the use of force, occupation, annexation and other aggressive acts,” it says.

EU’s foreign policy spokesperson Federica Mogherini said the treaty threatens security and stability in the region and violates Georgia’s sovereignty and territorial integrity, as well as international law and obligations taken by Russia after the war in August, 2008.

Also a spokesperson for the U.S. State Department expressed non-recognition of the treaty.

Russia signed a so-called treaty of alliance and integration with Abkhazia a few months ago, which Georgia assessed as annexation.