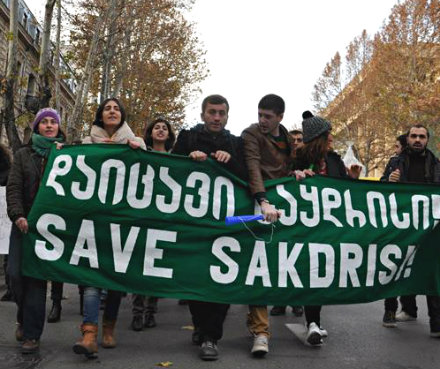 TBILISI, DFWatch–Youth activists continued to protest against the destruction of an ancient mine in the south of Georgia on Sunday and gathered outside the house of Prime Minister Irakli Garibashvili.

The reason was a comment by Garibashvili in a speech at Tbilisi State University that it is not confirmed that there was an ancient mine in Sakdrisi and that it is not a special place.

In his speech he said that it was just an assumption that Sakdrisi had a historic background and it was not confirmed. He continued that the company invested more than 300 million and employed 3,000 people behind whom there are families.

“Cultural heritage is good, but a choice must be made between retaining it and having it useless,” he said, adding that he cannot remember anyone speaking about Sakdrisi for years and it was the interest of a small group looking for grants.

“I address society asking what we prefer: saving a scientific family or Bolnisi municipality which is entirely tied to this company [RMG Gold],” he added.

Youth activists showed up outside Garibashvili’s house on Sunday and said the PM’s statement was not right. They want to stop mining work in Sakdrisi.

The students walked from the PM’s house to the old parliament building where there are two people on hunger strike demanding to halt the work in Sakdrisi. They also want to launch a criminal investigation into the explosion which destroyed the mine.

Some environmentalists and scientists believe that despite the explosions there is still some historic part left which can be saved and it is of vital importance to halt mining work immediately, as was required by Tbilisi City Court which imposed a ban on further work there until the the conclusion of a lawsuit.

Protesters continued their protest by walking to the government office and held a rally there. In the end they said if their demand is not fulfilled until Monday 18:00 they will hold a protest at the house of former Prime Minister Bidzina Ivanishvili, who is believed by many people to still be the the top decision maker in the country, even though he has stepped down from his post a year ago.

The youth activists have begun a series of concerts outside the government office that will be held almost every day unless the work at Sakdrisi is halted. The first concert was held on Saturday.