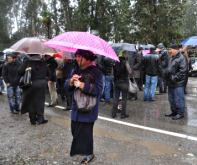 TBILISI, DFWatch–Refugees living on an abandoned military base near Batumi broke into the yeard of the Adjara Supreme Council on Monday, demanding to meet with its head.

Protesters blocked the road of Chakvi Batumi for ten minutes as sign of protest because council head Avtandil Beridze and Medea Vasadze, head of the human rights commission, didn’t meet them.

Beridze was busy while Vasadze was advised by her colleagues at the office not to fall for the ‘provocation’ and decided not to go out.

The rally started at 13:00 and was dissolved peacefully after a few hours.

While in the yard of the council building demonstrators shouted ‘come out’ ‘take care of us.’

The refugees complain about difficult conditions at the makeshift settlement on the abandoned 53rd battalion base in Khelvachauri outside of the regional capital.

As DF Watch earlier reported, the camp consists mostly of environmental refugees and socially vulnerable people who settled there in 2012 hoping that the new government would take care of them. Hundreds of people were living with no heating, electricity and water in the beginning. Conditions there are still bad. The number of people have reduced but there are still many living in cardboard houses.

Medea Vasadze responded that after they studied the situation it was discovered that only about 80 people are socially vulnerable while the others were attempting to acquire such a status in order to get allowances from the government. The 80 families will get assistance, she said, but the rest won’t.