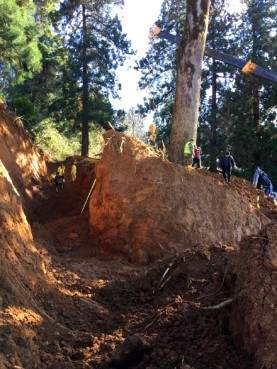 TBILISI, DFWatch–Five people were detained Wednesday during a rally in Tsikhisdziri on the Black Sea coast near Kobuleti.

They were protesting against the removal of three giant old trees which they suspect will be hauled by boat 40km up the coast to Ureki and placed in a garden belonging to businessman and former Prime Minister Bidzina Ivanishvili.

Three of the detainees were detained as they interfered with a tractor. They are members of a group of activists called Guerilla Gardening Tbilisi, who have previously resisted a new hotel and the cutting down of trees in a park in the capital, as well as tree-felling in Bakuriani.

The other two were detained during an argument with the police. They were activists from the National Movement, the former ruling party which after losing power in 2012 has sometimes aligned itself with anti-government causes.

The tree-moving was first reported a few of weeks ago. The Government of Adjara December 31 issued a decree that gives permission to Zimo Ltd to move two swamp cypress trees and one tree known as a Liriodendron tulipifera for a price of 6,200 laris.

According to the local newspaper Batumelebi, the Adjara government has confirmed that the trees are to be moved to a park belonging to former PM Ivanishvili.

Nata Peradze from Guerilla Gardening said it is common practice to move trees but these trees are too big and old and the roots might be damaged.

Work to uproot the old trees continued Thursday with around 40 policemen forming a cordon around one of the trees, while the National Movement held a rally nearby. The party has asked for a debate in two parliamentary committees Thursday.