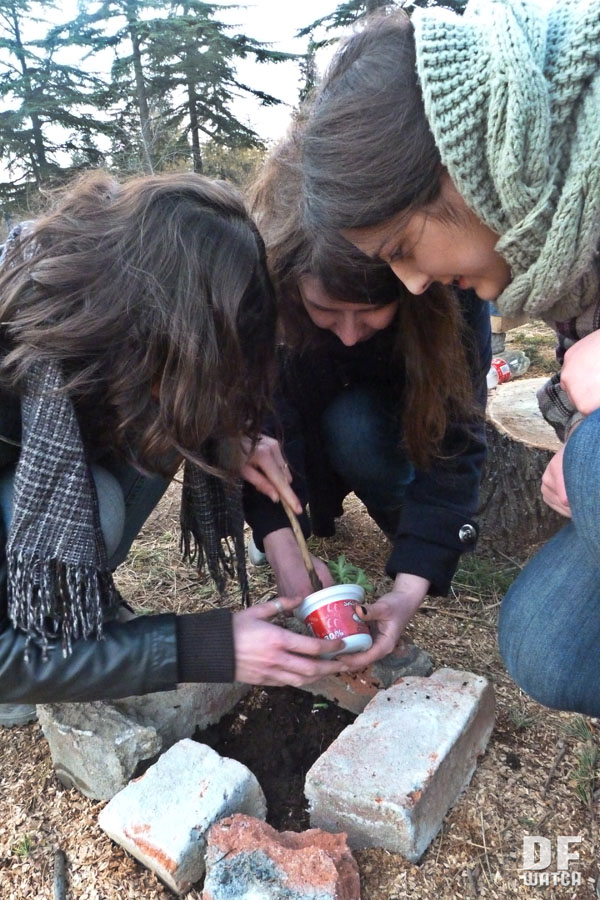 The police Saturday arrested Lasha Chkhartishvili, the founder of Greenpeace Supporters Group and one of the organizers for trying to interrupt construction workers who are preparing the foundation for a new police building.

Lumber workers also took away logs that lay strewn on the ground from previous clearance work and left the place clean. Now a total of eighteen trees of more than 70 years of age have been cleared. 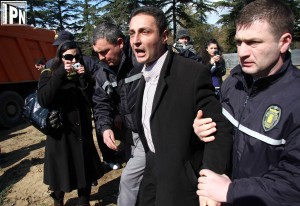 The government is clearing the area in order to build one more of Georgia’s characteristic transparent glass police stations. The building is planned in one end of the huge park, where you can find old abandoned buildings, rusty swings and playground for children giving the possibility to empty place for the new building without cutting the trees.

A campaign against the plans was launched by local people and groups that appreciate the area’s cultural and recreational value and don’t want to see it disappear. Activists have been looking after the trees for some time, but early this week lumber workers came in the night and cut fourteen trees.

After that, local people and groups started working all-night shifts guarding the area and interrupting if someone tries to start cutting trees. This went well until yesterday, when they managed to cut four more trees when nearly no one was in the park.

The activists say they will keep coming there until the developers finally decide to stop cutting the trees.

The group Center for Environmental Law was Saturday going to file what is called an administrative complaint with Tbilisi City Hall. They say that there exists what is called a permission for usage of the area, which only allows fencing off a certain area and locating a small booth there. There is nothing in the permission about cutting down trees, they say.

“Yesterday while we were here around fire getting warm, security car was standing there. Two guys came by, they were locals. The security threw them out, saying that if they wanted to get warmer they could go home,” says Sesili, one of the activists.

On the outwards side of the fence, activists had written graffiti calling for people to save the park and trees. But Friday, the fences were turned around, so that their messages now face inwards.

“The police was standing at every entrance of the park yesterday, they surrounded. But there was no serious tension yesterday,” Lika, another activist, tells us. 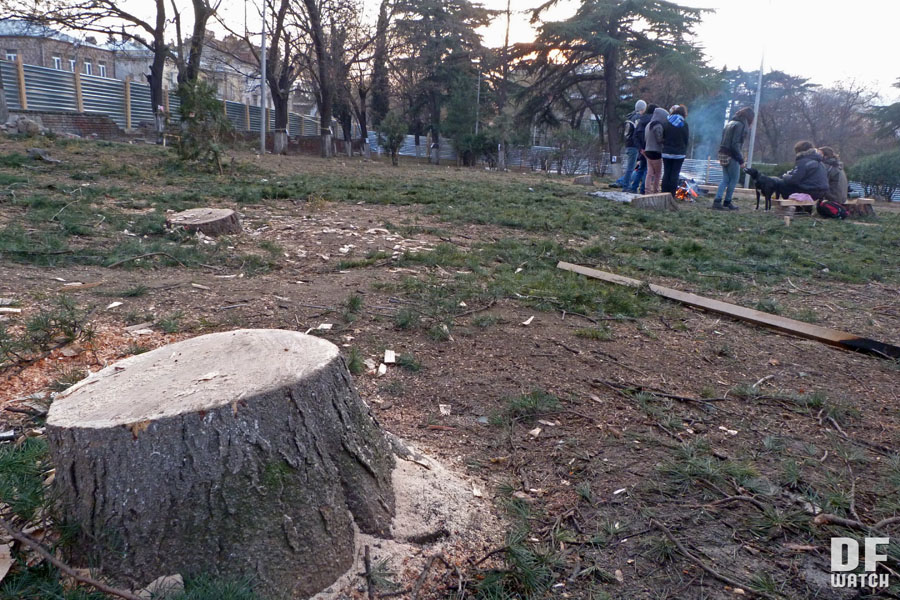 Aftivists are working shift to prevent more threes from being cut, but workers were able to clear four more trees. Saturday there is a performance at the central entrance to the park. (Photo: Mari Nikuradze.)

Up to fifteen people gathered around the fire. One of them had a guitar and played songs. A homeless, black dog feels happy hanging out with these people playing with him the whole day. A group of girls planted a small plant as a symbol of new life in the park where old trees were killed.

Locals say the trees in this park have medicinal use. Around 50 trees are left and in danger of being cut.

“We can plant new coniferous trees here, but the thing is that the best period for planting them is autumn. We can’t stand here until autumn like this; we should act and not allow them to cut them all down,” says Gia Gachechiladze, leader of the Green Movement.

“The trees here had a fertile period now and yes, they have decided to cut them exactly in this period. Here are Himalayan cedars too.”

A theatrical performance is planned for Saturday at the central entrance to the park.