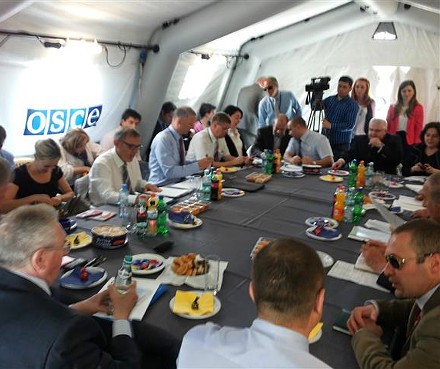 TBILISI, DFWatch–Two more people were detained on the disputed border with one of Georgia’s breakaway regions on Monday.

The incident took place the same day as the parties were gathered in a border village for EU- and OSCE-hosted negotiations.

The detainees, Gela Tsotsolashvili and Shalva Muladze, are from the villages Brolosani and Tseghveri. Both were taken to a detention facility in Tskhinvali, the center of the breakaway region South Ossetia.

The meeting took place at Ergneti and was mediated by Kęstutis Jankauskas, head of the EU Monitoring Mission in Georgia (EUMM), and Ambassador Angelo Gnaedinger, OSCE Special Representative for the South Caucasus.

As parties were gathered for the 55th time since fighting a brief war in 2008, starkly contrasting versions of the problem were voiced. The Georgian side highlighted the problem of civilians being detained on the disputed border and protested against the barbed wire and fences that have been installed along the border line, which are regarded as illegal and are interrupting the lives of locals. Georgia’s Interior Ministry said there are currently thirteen Georgians in the Tskhinvali detention facility.

The South Ossetian side said they have had called on Georgian authorities to carry out information work among the population along the border in connection with harvest season for bladdernut (‘jonjoli’), which grows in the wild. There is a peak in detentions every year during the harvest season.

“Unfortunately, this work was not carried out,” said Hoch Gagloyty, the South Ossetian negotiator, who accused the Georgian side of using the border detention issue for propaganda purposes.

Another point of dissent at the meeting of the Incident Prevention and Response Mechanisms (IPRM) was an incident which began on May 13, when, according to Gagloyty, several armed men dressed in paramilitary clothing crossed the border in the area between Ditsi and Pris. The next day, the men tried to dismantle the protective structures on the border, he claimed. The South Ossetian negotiators presented video footage of the incident. Gagloyty also noted a trend of border signs being destroyed, according to RES, the public news agency in South Ossetia.

The agency reported that the breakaway region closed the southern border in the evening of May 25 and until further notice, due to an alleged danger of provocative incidents by supporters of ex-President Saakashvili. Interpressnews reported that the border closure was unannounced and prevented people from the Akhalgori district, under breakaway control, from traveling to Tbilisi to take part in the celebration of Independence Day, May 26.

The next IPRM meeting will take place on 24th June.