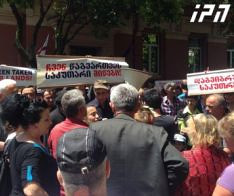 TBILISI, DFWatch–Socially disadvantaged groups protested in Batumi on Monday, some demanding government help to handle their bank loans, others to get back land property taken from them.

Some of them demanded to get back land property that they were given during the Saakashvili presidency which they claim was later taken from them.

Among the protesters were also eco-migrants and socially vulnerable, and the demand many of them voice is to ‘restore social justice.’

There were also people who suffered loss due to bank loans and they want the government to help them being evicted from their home and reduce the interest rate on their loan.

Demonstrators gathered at Batumi Theater and walked along Rustaveli Street to end up outside the building of the government in Adjara, Georgia’s southwesternmost region.

Some of the participants said they voted for Georgian Dream in the 2012 election, but the coalition has let down their hopes.

Others claim they have had their agricultural lands taken away from them say the government many times promised to return the property. They demand that someone examines what happened, for example by creating a commission to help to solve their problems. But none of this has happened the last two years.

A few hundred people participated in the protest. They plan to continue to demonstrate together until they see some real steps taken either by the local or the central government. (Interpressnews.)