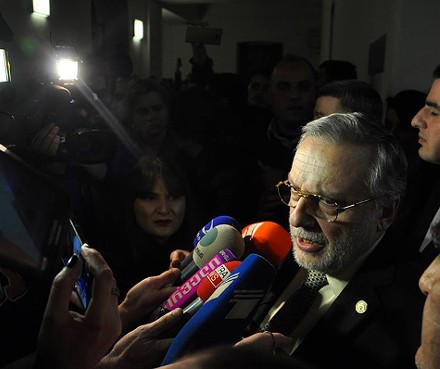 TBILISI, DFWatch–Vladimer Papava, the rector of Tbilisi State University (TSU), resigned Wednesday, but denied that he had done so because of pressure.

“A lot of things influenced this decision. Their hunger strike and your demands, but many other things,” Vladimer Papava said.

The main building of TSU was paralyzed for nearly a week in a student sit-in with two factions raising different demands. Papava’s resignation was the demand of the student’s union, the Tvitmmartveloba.

The spontaneous group of protesters called Auditorium 115 also wanted the rector to resign but focused more of their energy on reforming the election system at the university and rooting out the use of surveillance agents.

The Academic Council approved Papava’s resignation. The Student’s Union, which demanded his resignation, ended their hunger strike, which was launched on Tuesday. But the rector maintained that it was his own decision and that he was not under any kind of pressure.

“If you ask Tvitmmartveloba, they will say that I resigned because they went on a hunger strike. If they ask you, I resigned because you required it in a statement. We cannot play ping pong here,” Papava told students of Auditorium 115 after the meeting of the Academic Council.

Papava will remain on his post until May 1. An acting rector has to be selected before that time. An election will be held for acting rector.

It was one of the major demands of Auditorium 115 to establish new regulations and a system of electing a rector and academic council. They demanded the resignation of both of these bodies and called for a transitional period in which reforms could be implemented at the university.

Members of the student’s union, the Tvitmmartveloba, said they would continue fighting against the faulty system at the university established since the 1990s during Eduard Shevardnadze’s presidency.

The Auditorium 115 faction said they have taken one more step toward victory.