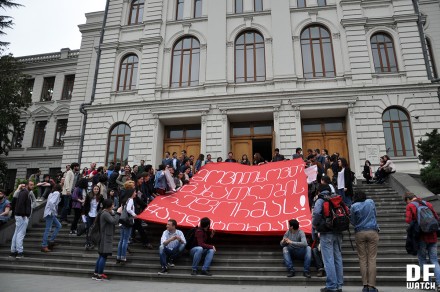 TBILISI, DFWatch–Students at Tbilisi State University (TSU) protested on Monday against what they call a ‘police regime’, demanding that law enforcement bodies stop threatening their families and that the so-called ODRs are removed from publicly owned universities.

The threats protesters from a new student movement called Auditorium 115 are subjected to sound like something from the Soviet Union. The students claim that law enforcement bodies are threatening that if they don’t stop their political activism, their family members will be fired from their jobs.

“This is a continuation of a system we were fighting against in 2012,” Anamaria Bragvadze, one of the activists of Auditorium 115 said in front of the TSU building.

She said that despite the change of government in 2012, the system remains the same. 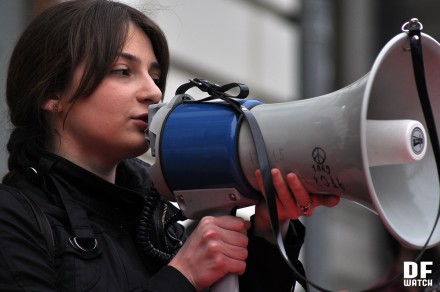 “We want the persecution and repressions to end, otherwise no-one can say that we live in a democratic state where we can freely express our opinion.”

Last week, the Ombudsman’s Office said they had received an official letter from the Ministry of Internal Affairs (MIA), where they confirmed that MIA employees in fact visited the family of Irakli Kupradze, one of the activists of Auditorium 115. MIA explained that the visit aimed to ‘refresh data on Irakli Kupradze  in the documentation about the district’ where the family lived. The ombudsman promised to investigate this case further.

“This is weird, because, first of all, how could they renew the information as they never had any of this information in the past and they had never visited in the past to collect information on me,” Kupradze wrote on his Facebook page in response. 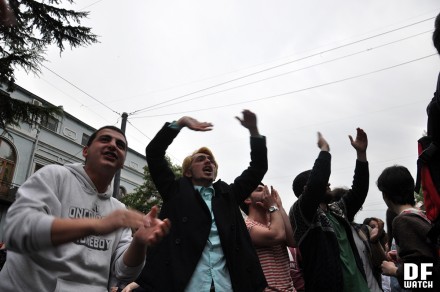 “I haven’t lived in Batumi for four years now,” he added. The MIA employees visited his family in Batumi, their permanent residence.

Monday, students gathered at the TSU garden and marched to the office of the State Security Service. They also demanded to have particular cases of alleged threats against their family members properly investigated.

The protests by Auditorium 115 was also an incentive to the students at Georgian Technical University (GTU), where students and professors demand the resignation of the rector, who was elected three times in a row.

April 22, two counter-rallies were held a GTU’s sixth campus, where students also protested the system of having a students’ union at the university. They share the view of Auditorium 115 that the students’ unions is misspending the money granted from state budget. 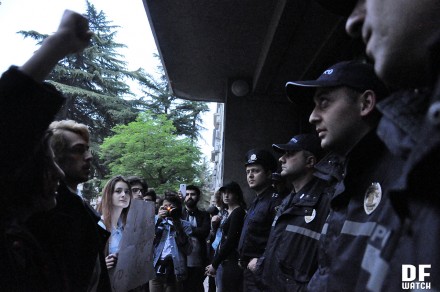 The Students’ Union at GTU claimed that they were protected by the authority of th erector and their own privileges, while the students, on the other hand, demanded educational reforms.

During the last twelve days, several professors at GTU have been on hunger strike. One of the professors was taken to the hospital, as his condition was bad, but he later rejoined his fellow protesters and went on hunger strike again.

Sunday, they said they are temporarily halting the hunger strike because of Easter, but the strike will resume and demands will remain the same: the resignation of the rector of GTU, faster education reforms and that the investigative service of the Finance Ministry must conduct an audit of GTU.