Students and lecturers in joint protest at Georgian Technical University

Students and lecturers in joint protest at Georgian Technical University 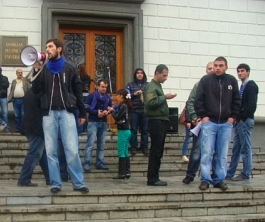 TBILISI, DFWatch–For the last week, several lecturers at Georgian Technical University (GTU) have been on hunger strike demanding the resignation of the rector, who has been elected three times in a row.

Five lecturers, with the support of students, also demand a new election for GTU’s academic council, the main governing body of the university.

The lecturers and students who are part of the protest agree with the demand for education reform put forth by the Auditorium 115 movement at Tbilisi State University (TSU). During the recent protests at TSU, Auditorium 115 expressed support with GTU professors and students, while some of the students of GTU attended Auditorium 115’s demonstrations.

GTU students warn that they will launch  rallies, while the administration of the university claims that the protesters do not have any legal basis for demanding the resignation of the council and the rector and thus their demands won’t be fulfilled.

GTU lecturer Zaal Mikadze told Rustavi 2 that they do have not yet seen any response from the administration and therefore the hunger strike will continue.

“We want justice to be restored, there is no alternative for us now.”

Mikadze said Monday that he switches to dry hunger strike after he heard that rector Archil Prangishvili said that the lecturers on hunger strike were secretly eating. Mikadze demands proof or an apology from the rector.

Shalva Tadumadze, the government’s parliamentary secretary, on Monday offered lecturers to get engaged in the process of education reform and stop their hunger strike, but they rejected the offer.

Ombudsman Ucha Nanuashvili the same day visited the lecturers. He told journalists that the ombudsman’s office is now researching how Prangishvili became rector three terms in a row.