Revived TSU student protest called off after talks with PM

Revived TSU student protest called off after talks with PM 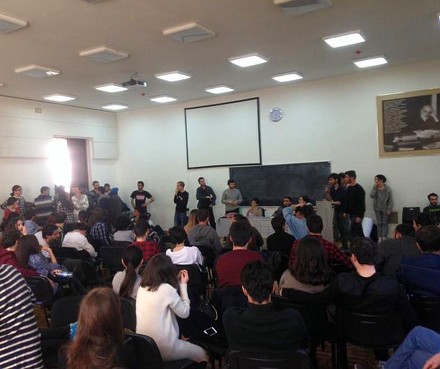 Students of Tbilisi State University resumed their sit-in on Saturday, demanding education reform. They warned they would continue protesting until Kvirikashvili came and met them and promise to fulfil their demands.

Saturday morning, Kvirikashvili showed up at the journalism campus with fewer security guards than usual. The door was locked from the inside, so he had to cross the street and meet with the students at Auditorium 115 in the main university building.

Auditorium 115, a movement which was created during sit-in at the main building of TSU in the beginning of March, early Saturday morning locked themselves inside the journalism building, which is on the other side of the street from the main building.

The meeting was closed for the media, but students attending the meeting posted updates from the meeting on Facebook.

“Kvirikashvili: I am not leftist.

Student: Mr Giorgi, how can we discuss political culture, when the ruling party claims that it is social-democratic, but its leader claims that he is not leftist?

Another item posted on Facebook was that lecturers and students are working together in the movement.

“I am with you in this movement and I don’t like this system either,” Kvirikashvili was quoted saying. 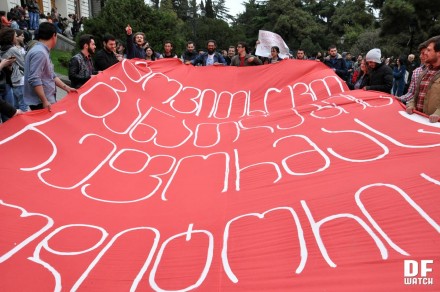 After leaving TSU, Kvirikashvili told journalists that agreement was reached with the students that the student’s union shouldn’t exist in the form it exists now.

Tornike Shevardnadze, one of the members of Auditorium 115, told DF Watch after the meeting that the PM told them he doesn’t like the education system, and that the university has to have more financing.

“All this is nice, but what I fear is that the minister as well agreed with us, but it didn’t bring any real results. Now it is important that we see that some real changes are made and then we will stop the protests.”

Tornike says that he cannot assess what political importance the PM’s visit had.

“We demanded the meeting and he came. It is important that he personally comes to the university.” 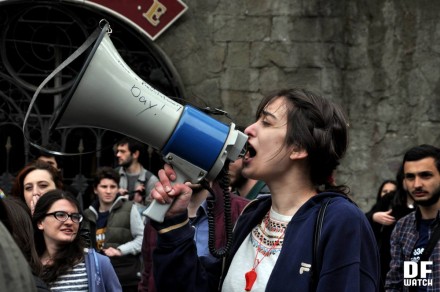 The prime minister promised that he plans another meeting with the students at the end of next week, this time with the working group to discuss the proposed amendments.

Also on Saturday, protesters walked from TSU to the government’s office to demand a meeting with the PM.

Despite strong wind, toppled trees and damaged roofs in the capital, hundreds of students showed up at the protest, joined by students from Ilia State University, as well as Batumi University and Technical University. They gathered in the yard of the main TSU building.

When the protests at TSU ended in mid March, the Ministry of Education promised to prepare a package of legislative amendments which would respond to the students’ demands, but the students didn’t like the proposed bill and thought it wouldn’t really mean any changes.

In an interview with the Channel 1 on Saturday, Minister of Education Tamar Sanikidze said that the proposed amendments students were shown is not the final version, only a working draft sent out to universities so that the ministry can get an impression of what the universities think of it. She underlined the importance of holding consultations and discussions about the proposal.

“We need an opportunity to analyze those demands, how universities see problems. Then there was meant to hold another summing meeting to finally decide on a certain model. Unfortunately, we witnessed a protest rally which is different from the demands which they had in the beginning. It has gone to another stage, which is really unfortunate,” she said.

Lado Papava, the rector of TSU who resigned a few weeks ago, came to the TSU’s building number 6 on Saturday and said that the prime minister has to respond to students, either by coming and meeting them or at least by making a statement.

He said he doesn’t really like the fact that the entire building is blocked and no lectures can be conducted there.

“However students have a right to express their opinion. So now the next step needs to be taken by people to whom this concerns,” he said.

Sunday, Shalva Sabauri, president of the student’s union welcomed the fact that the PM came to the university, but he said it was unfair that he meets only with half of the students and didn’t listen to the other half.