Abkhazia’s parliament: MP’s car explosion was an ‘act of terrorism’

Abkhazia’s parliament: MP’s car explosion was an ‘act of terrorism’ 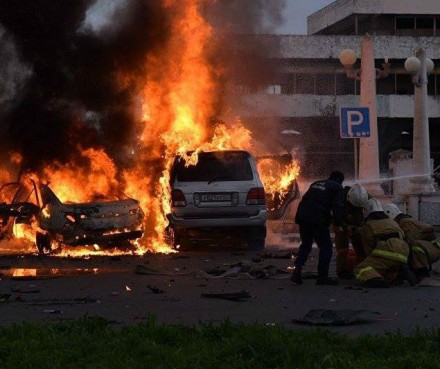 TBILISI, DFWatch–The opposition suggests that the explosion could be connected to the government’s plans to allow foreign nationals to buy property in Abkhazia, while major political actors call for cross-political solidarity.

Members of Abkhazia’s de facto parliament, the National Assembly issued a statement, in which they condemned the recent explosion of MP Almas Japua’s car as an ‘act of terrorism’.

‘The Parliament of the Republic of Abkhazia, which is an independent branch of government representing the interests of all the people of Abkhazia, considers this act of terrorism as a challenge not only to the legislative body, but also to the entire political system of our country’, the statement adopted during an extraordinary session of the National Assembly reads.

‘Throughout the recent history, the decision to solve all acute problems by means of an internal dialogue became a political tradition and no pressure can change these principles or to affect our chosen course of developing the statehood of Abkhazia’, the statement reads.

Two passers-by suffered in a car explosion on the evening of 16 April in downtown Sukhumi, close to seafront. MP Japua reportedly left the car minutes before the explosion.

During the Assembly’s extraordinary session, general prosecutor Alyksa Lomia stated that the explosion was caused by a hidden explosive device containing up to 150 grams of TNT and was detonated remotely.

Secretary of the Security Council, Muhamed Kylba suggested that the explosion was an attempt at intimidation rather than assassination.

‘The place which was chosen for the explosion was public and the explosive device was detonated remotely. It shows that they didn’t intend to kill MP [Japua], otherwise they would blow up the car with him in it’, Mr Kylba suggested.

Abkhazia’s Prosecutor’s Office opened an investigation into a possible case of terrorism. Investigators are taking into consideration a possibility that the explosion was related to MP Japua’s political activity.

Almas Japua is a MP from the opposition Ainar party, which in the recent months has been a vocal critic of the government. The party’s ideology is grounded in Abkhaz nationalism, the importance of the apsuara (‘Abkhaz traditional law’), and criticism of exceedingly close ties with Russia.

On 29 March, MP Japua put forward a motion of no confidence for Prime Minister Artur Amkwab. He also spoke up against the government’s plan to make it legal for foreigners to buy property in Abkhazia.

‘If this “terrorist attack” was a work of individuals, whose main purpose is to force through the law on selling property to foreign nationals which creates a direct and real threat to the existence of the Abkhazian state, then we declare to all lobbyists based in Abkhazia — we are now stronger and more confident in the righteousness of our cause than ever’, Mr Jopua added.

Russia has been actively lobbying for the law’s adoption. The idea of introducing a moratorium on sale of real estate enjoys support among the members of Abkhazian society, who are concerned by the fact that Russian citizens and companies with much larger purchasing power than average Abkhazians will be able to buy property in the republic.

Some nationalists are also weary of the fact that ethnic Georgians who are residents of Abkhazia, but are not considered citizens, could be able to acquire land. In a common superstition, Abkhazia’s Georgians also enjoy higher purchasing power than average ethnic Abkhaz and their supposed loyalty to Georgia could turn property owned by them into a political tool used by the Georgian government to wield influence over Abkhazia.

However, speaker of parliament Valeri Bganba suggested that the explosion and MP Japua’s political activity can be unrelated.

‘Not only Almas Japua has been involved in this draft law, so I doubt that the explosion was linked to his activities as a MP’, Mr Bganba said.

On 18 April, a rally was held in Sukhumi in support of a moratorium on sale of real estate to foreign nationals. MP Almas Japua commented publically on the explosion.

‘I’m not inclined to link what happened to anything specific, but nevertheless, I’m making some assumptions. There is one problem which has a potential to become worse than the sale of real estate — this is when members of society begin to fight with each other. I wouldn’t like to see this issue turn into a confrontation or to be used for putting blame on those, who don’t deserve it’, Mr Japua said during the rally.

The article discusses developments as seen from Abkhazia which doesn’t imply a position on Abkhazia’s international legal status and might not reflect the view of the publisher. The word ‘Abkhaz’ refers to an ethnicity, while ‘Abkhazian’ refers to an inhabitant of Abkhazia regardless their ethnic background or an institution based in Abkhazia. Abkhazian place-names and personal names are transliterated according to how they would be spelled in the Abkhaz language.

Caucasian Knot and Apsnypress contributed to this report.