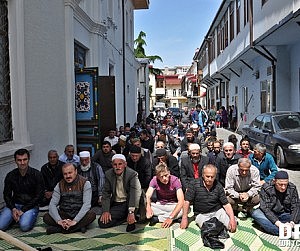 The protesters marched to the government building carrying three main demands: allocating land for a construction of a new mosque and issuing a construction permit, resolving the conflict over the boarding school in Kobuleti, and generally protecting Muslims’ rights.

Representatives of local Muslim community rallied demanding a right to construct a new mosque in February and in March this year, as Batumi’s only existing mosque, called Orta Jame, is not large enough, which forces people to pray on the street.

In February, the activists passed over 12 thousand signatures to the hands of Archil Khabadze, head of the Acharan autonomous government.

‘Consultations are ongoing; we’re working on a variety of proposals. The State Agency for Religious Issues, which is a part of the prime minister’s office, is actively involved. We will have another meeting with the prime minister in this regard. The prime minister is interested in everything and is aware what was done during the past three years and what demands the Muslim congregation has had since the 90s. Accordingly, we will make a decision. The letter, which was signed by 12 thousand citizens will be answered. There will be several options available’, Mr Khabadze said.