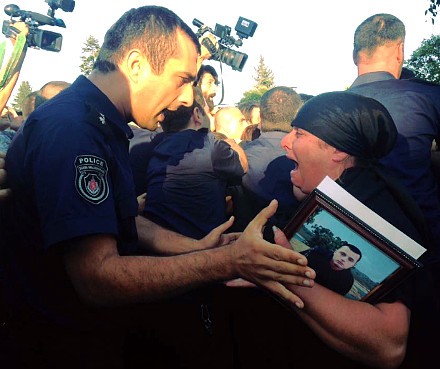 TBILISI, DFWatch–Activists clashed with police in a town in western Georgia on Saturday. The protesters blame the government’s drug policy for driving a 22-year-old man to take his own life.

Protesters gathered in front of the Samtredia police station shouting ‘no to the police regime’ and ‘the government murdered Demur Sturua’.

There was a brief clash between the police and the crowd of protesters.

When the young man, Demur Sturua, committed suicide more than a week ago, he left a note where he wrote that a policeman had threatened him to reveal the identity of people dealing marijuana in the town, Samtredia.

The note also said the police asked him for information about anyone cultivating the plant in the villages Dapnari, Kulashi and Sajavakho.

Sturua wrote in his note that the policeman took him to the village Ianeti, beat him and threatened to charge him with a crime he didn’t commit.

The case is being investigated under article 115 of the Criminal Code about bringing someone to the point of suicide.

The policeman who was named in the suicide note has taken leave until the investigation is completed.

After Saturday’s rally outside the police building was over, the crowd continued demonstrating in the streets of Samtredia, gathered in a park in front of the municipality building, and then dissolved.

One of the participants, Giorgi Sopromadze, was arrested. The police said that they had wanted to question him as a witness, but he refused. Sopromadze may soon be released, as he has a right to refuse to give testimony to the police without going before a court.

A spokesperson for the Ministry of Internal Affairs (MIA) told Interpressnews that one of the participants at the rally was questioned as a witness.

Late at night, the movement which organized the rally wrote on Facebook that the police arrested three activists in Samtredia and took them to the drug unit in Borjomi.

Also on Saturday, a rally was held in front of the government building in Tbilisi, where protesters accused the government of having murdered Sturua.

Both rallies were organized by a group called White Noise (თეთრი ხმაურის მოძრაობა).