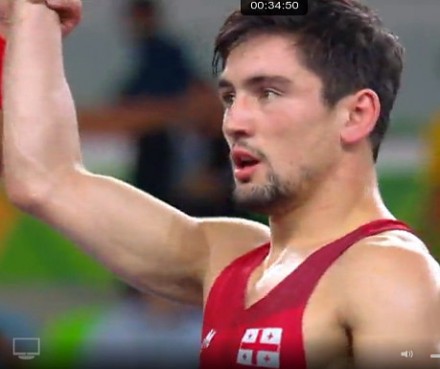 In the final, Khinchegashvili faced Japan’s Rei Higuchi, who got silver.

The first round ended with the score 0-1 in favor of the Higuchi, while the second round finished 4-3 in favor of Khinchegashvili.

Khinchegashvili defeated Bulgaria’s Vladimir Dubov 8-4 in the semifinal. Before that, he defeated Kazakh Nurislam Sanayev and Azerbaijan’s Haji Aliyev in quarterfinals.

This is Khinchegashvili’s second Olympic medal, after he won silver in the London Olympics in 2012 in men’s freestyle 55 kg.

Khinchegashvili won gold in men’s 57kg in the World Championship in Las Vegas in 2015. He won gold twice in European Championships in 2014 and 2016, in the weight categories 57kg and 61kg.

This is Georgia’s sixth medal in Rio: two gold, one silver and three bronze medals in weightlifting, judo and wrestling.