Main opposition candidate in Abkhazia stands down due to ill health, replacement vows to stay on same course

Main opposition candidate in Abkhazia stands down due to ill health, replacement vows to stay on same course 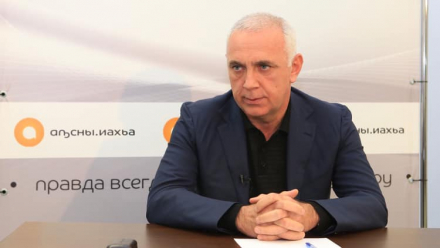 TBILISI, DFWatch–One of the opposition parties in Abkhazia has officially nominated its chairman Alhaz Kvitsinia as a candidate for president of the breakaway republic.

A local party official said this in a speech at a party congress of the Amtsakhar party, one of the largest opposition parties in the disputed region.

Aslan Bzhania, the joint candidate of the Abkhaz opposition, who has opposed the incumbent de facto president of breakaway Abkhazia, will not run in the presidential elections due to ill health.

Addressing supporters from Germany, where he is undergoing medical treatment, Bzhania said he would support the opposition cause but can’t currently run for president.

The Abkhaz opposition is united in believing that Bzhania was poisoned. However, Abkhazia’s breakaway authorities claim the opposition leader’s sudden illness is due to ordinary food intoxication, not deliberate poisoning.

The mystery surrounding the opposition leader’s illness has caused a mass outcry in Abkhazia.

Bzhania is a former KGB operative, as is Raul Khajimba, incumbent de facto president, and commands significant authority among those in Abkhazia’s power circles who oppose Khajimba.

In May, the opposition held mass protests demanding a postponement of the elections due to Bzhania’s ill health. Eventually, breakaway authorities and the opposition reached a compromise and agreed to hold elections on August 25.

Alhaz Kvitsinia has publicly vowed to “pursue the course of our leader Aslan Bzhania”. He has publicly alleged that he believes Bzhania was deliberately poisoned.

So far over 10 politicians have been registered as presidential candidates. But barely any of them, including Kvitsinia, may pose a real threat to Raul Khajimba in the elections, many commentators think both in Sokhumi and Tbilisi.

“Presumably, Bzhania was poisoned in order to exclude him from these ‘elections’. He was the only politician to put up serious competition to Khajimba. Now none of the candidates have a chance,” Tbilisi-based expert on Abkhazia, Irakli Tskitishvili, was quoted as saying by Rezonansi newspaper.

Bzhania enjoys support throughout the entire eastern Abkhazia, i.e. Ochamchire, Tkvarcheli and Gali districts, and has “good friends” in the Kremlin as well, Tskitishvili said, adding that none of these assets are available to the other candidates.

Without the support of Russian authorities, barely any figure in Abkhazia can expect to stand a chance in Sokhumi politics, he said.