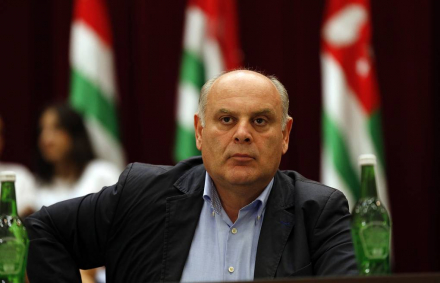 TBILISI, DFWatch–Suspicions grew Monday that a key opposition figure in Abkhazia has been poisoned, after two of his bodyguards were hospitalized in a serious condition, at least one of them with similar symptoms.

Although officially, Aslan Bzhania, the main opponent of the incumbent de facto president, and his two guards are being treated for “pneumonia”, many in the breakaway republic believe they have actually been poisoned.

Bzhania, who was de facto chief of state security in 2010-2014 and current is a member of the breakaway parliament, fell sick on Friday in Sokhumi. He was immediately rushed to Sochi and then to Moscow for treatment.

Currently all three are undergoing medical treatment in one of Moscow’s hospitals.

Sokhumi plans to hold elections for de facto president July 21, when the incumbent, Raul Khajimba, will face fierce resistance by a coalition of opposition political parties and movements who have chosen Bzhania as their joint candidate.

Bzhania is a former KGB operative, as is Khajimba, and commands significant authority among those in Abkhazia’s power circles who oppose Khajimba.

The situation has been aggravated by the deepening of economic problems and dwindling financial support from sanctions-ridden Russia.