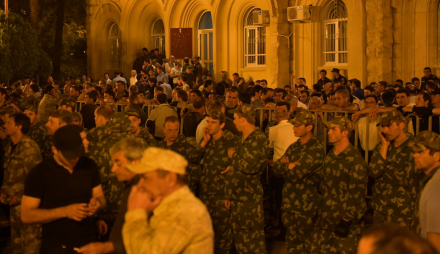 TBILISI, DFWatch–The opposition in breakaway Abkhazia ended their rally in front of parliament building in Sokhumi on Tuesday, after reaching a compromise with de facto authorities.

The sides have agreed to postpone the presidential elections to August 26. The de facto parliament earlier decided to hold elections in July, while the opposition had demanded to move it to fall and started rallying in front of parliament on Monday.

The date is of crucial significance, as the opposition leader and main opponent of de facto president Raul Khajimba is still in serious condition after suddenly falling ill in April. The opposition suspects he was poisoned.

Breakaway authorities even agreed to relieve the opposition leader, Aslan Bzhania, from some procedures which might have caused problems, taking into account his health condition.