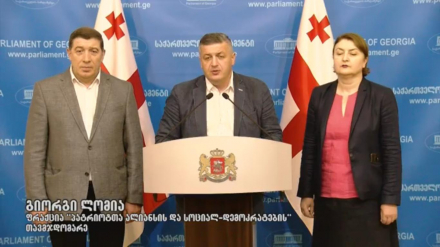 From the left to right: Gocha Tevdoradze, Giorgi Lomia and Ada Marshania, Alliance of Patriots MPs at a press conference on Friday.

TBILISI, DFWatch–Three members of the Georgian parliament are to visit Moscow and meet the Russian Duma member whose recent visit to Tbilisi led to the country’s worst political crisis for years.

The three Georgian MPs represent the Alliance of Patriots and plan to meet Duma member Sergey Gavrilov, who sparked outrage last month when he sat in the speaker’s chair in the parliament building in Tbilisi during a conference for parliamentarians from Orthodox countries.

A party spokesperson said the visit, which also includes meetings with other Russian politicians, aims to enhance relations between the two countries.

Alliance of Patriots (AP) is a political party that is generally perceived as having pro-Russian sympathies.

Its MPs Ada Marshania, Giorgi Lomia and Gocha Tevdoradze will also meet Konstantin Kosachev, who chairs the Foreign Affairs Committee in the Russian parliament’s upper chamber and is notorious for his staunch pro-Putin stance.

Another of the group’s scheduled meetings is with Leonid Kalashnikov, head of the Committee on Commonwealth of Independent States Affairs, Eurasian Integration and Relations with Compatriots at the State Duma, the lower chamber of Russia’s parliament.

Direct flights between Georgia and Russia were suspended on July 8, and the delegation will reach Moscow via Yerevan, Ada Marshania told journalists on Friday.

“We are sure that our visit to Moscow will bring good to the country,” Giorgi Lomia, chairman of the AP parliamentary faction, said at a press conference on Friday.

The recent sanctions imposed by Russia, as well as Georgia’s breakaway regions of Abkhazia and South Ossetia will also be on the agenda during the visit, Lomia said.

AP members have earlier visited Moscow on several occasions and held talks with Russian politicians, a practice some see as capitulation or collaboration with the enemy.

The party flatly denies these accusations, claiming instead that their only goal is to ease the hardships of ordinary Georgians hit by the Russian sanctions.

On June 21, President Vladimir Putin issued a decree to facilitate the evacuation of Russian tourists from Georgia. The decree also bans Russian airlines from flights to Georgia from July 8. Russia also ‘recommended’ that tourism agencies discontinue sales of tours to Georgia.