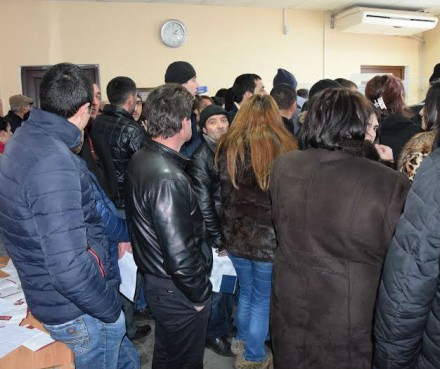 Local residents queuing at the Public Service Hall in Akhalkalaki for the residency permits in January (Jnews.ge)

Samtskhe-Javakheti Armenians applaud the comeback of the year-long visa-free stay permit in Georgia, as those who hold Armenian or Russian passport no longer need a residency permit to stay in the country.

As DFWatch has reported earlier this week, in accordance with the newest changes in the immigration law, citizens of 94 countries are free to stay in Georgia for one full year without a visa.

The U-turn in visa regulations happened after several month of struggle and constant criticism against stricter immigration regulations introduced in September 1, 2014. Georgia then striped citizens from more than 100 countries of 360-day visa and introduced 90 out of 180 days visa-free stay instead.

“People are happy, but a lot of them still can not believe in the new changes. I get asked over and over again, if this is true,” Rima Garibian, Akhalkalaki-based journalist, told DFWatch. According to her, there are approx. 5000 residents in Samtskhe-Javakheti, without Georgian citizenship, with Russian and Armenian passports, as it makes it easier to get a job in these countries.

When the Russian military base in Akhalkalaki closed in 2007, the region lost its main employer. Poor economic conditions, lack of knowledge of the state language and the habit to work abroad in Russia or Armenia during the soviet period resulted in a lot of Javakheti Armenians giving up their Georgian citizenship and opting for a Russian or an Armenian instead.

Before the last changes in the immigration law, such local residents were able to stay just three months in Georgia without having a temporary or permanent residency permit. Allegedly, a lot of them got their applications for the residency permit refused, and it caused constant dissatisfaction with the central government in the region.