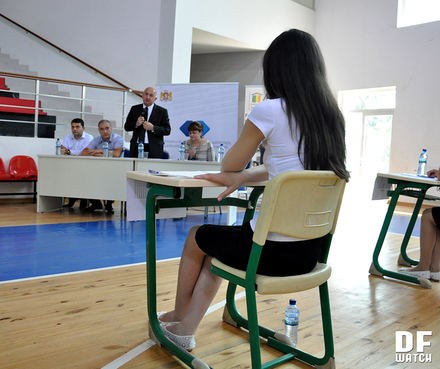 TBILISI, DFWatch–The Armenians from Samtskhe-Javakheti have a dilemma: They feel isolated from Georgian society because they don’t speak the state language, but at the same time they don’t have enough motivation to learn it.

Shushana Shirinian, a journalist from Akhalkalaki, has lived in Georgia for all her live, but she does not speak Georgian. However, she needs it on a daily basis, because of her occupation.  “All official information and the majority of news are in Georgian, so one must know this language to follow what is going on in the country,” Shirinian explains.

Her story is not unique, as the language which is most heard on the streets of Akhalkalaki is not Georgian, but Armenian.

Knowledge of Georgian is not beneficial?

Shirinian says she has attended several Georgian language courses organized by the government and various organizations. However, she did not like the methodology and felt that she did not learn as much as she could. In Shirinian’s opinion, if someone really wants to learn Georgian, they should hire a private teacher for individual lessons.

But locals see that knowing Georgian does not necessarily lead to a job, and a lot of employed people do not speak any Georgian at all, she explained. Thus some feel that to hire a private Georgian teacher would be a waste of money, especially if they are unemployed at the moment. One ninety-minute individual Georgian language lesson costs up to 10 laris.

Georgian language teacher Dali Aghdgomeladze agrees that one can see a lack of motivation among locals toward learning Georgian, as people are hired not on the basis of their specific knowledge, Georgian included, but based on their social contacts. “So it is wrong to say that if you don’t know the state language, you can’t find a job. For example, our local politicians do not know Georgian, but that doesn’t prevent them from performing their duties,” she adds.

MP: we need to motivate people

Georgian MP from Akhalkalaki Samvel Petrosian stressed that it is important to be able to communicate freely in the official language, but it is not enough just to speak it to be integrated and represented in Georgian society. “Armenians in Tbilisi speak Georgian even better than some Georgians. But are there any of them in politics? None. It’s the same here in this region. So instead of pointing out that people here don’t know Georgian, we should stress that if someone knows the state language, it enables them, they can become president or prime minister, work in the government and so on. It would motivate people,” the MP explained.

At the moment, the Zurab Zhvania School of Public Administration provides free Georgian courses for public sector employees, including school teachers, but there are no such programs for private sector workers or those who are unemployed.

Things are changing and the new generation seems to be more motivated to learn the official language than their parents. Sanetik Maitesian, director of the House of the Future, a community center which provides post-school activities for students, told DF Watch that there are 20 students from Armenian and Russian schools who are attending Georgian classes in the afternoons.

In addition, as DF Watch has reported before, there are plans in the Ministry of Education to improve current bilingual education programs, not only by teaching Georgian to Armenian teachers, but also by employing Georgian-speaking teachers to work side-by-side with their Armenian counterparts.

“Youth want to study Georgian as they see themselves studying and working in this country,” Shirinian explained.