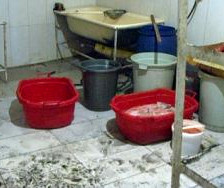 TBILISI, DFWatch–The investigative service of the Finance Ministry has found that a company produced and sold smoked fish in violation of all hygienic and sanitary standards.

Criminal charges have been brought against Tengiz Tsikaridze, who owns Donato Ltd, a company that manufactures smoked fish.

The investigative service, which also posted a video of its findings, says fish was permanently prepared under conditions that were threatening to human life and health, and furthermore, sold in large quantities.

According to the results of the examination, the quality of the fish is low and dangerous to life.

The suspect may face from five to seven years in prison if he is found guilty.

Meanwhile, the National Food Agency discovered expired food at a boarding school in the village Salibauri, near Khelvachauri. Among the expired food was 165 units of eggs and five kg of spread, which was destroyed, while some of the food was sent to a laboratory for examination. Fund Viktoria, the company which supplies the school with food, was fined by 500 laris (USD 220).

In the morning the day before, six pupils from the same school were brought to the emergency unit because they had strong stomach ache. The Food Agency thinks the children were poisoned by the expired food. The pupils have now recovered.