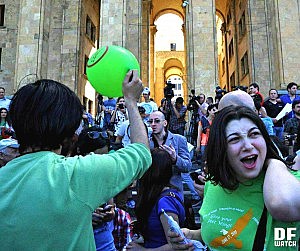 TBILISI, DFWatch–Georgia’s Constitutional Court on Thursday struck down a law that has landed many young people in jail for years for using marijuana.

The court abolished part of article 273 of the Criminal code, which mandated jail sentence for anyone caught using marijuana for a second time.

October 24, 2015, the Constitutional Court abolished the second section of article 260 of the Criminal Code which mandated prison terms for using, storing and purchasing marijuana for personal use. That passage in the law prescribed 7 to 14 years jail sentences for buying and possessing small amounts of marijuana.

The court’s ruling on Thursday concludes a lawsuit filed by Beka Tsikarishvili against the Georgian parliament. Tsikarishvili, a young man working at a local non-governmental organization, was detained in 2014 for using marijuana.

Groups of young people campaigned in his support and demanded to decriminalize marijuana and ease the policy toward soft drugs.

Thursday’s ruling was based on the decision of October 24. Referring to its previous decision, the Constitutional Court explained in a short statement that using marijuana on two or more occasions cannot be more dangerous than storing less than 70 grams of it for personal use.

The October 24 ruling only applied to purchasing and keeping marijuana, but not using it. The new ruling applies to using marijuana on more than one occasion.