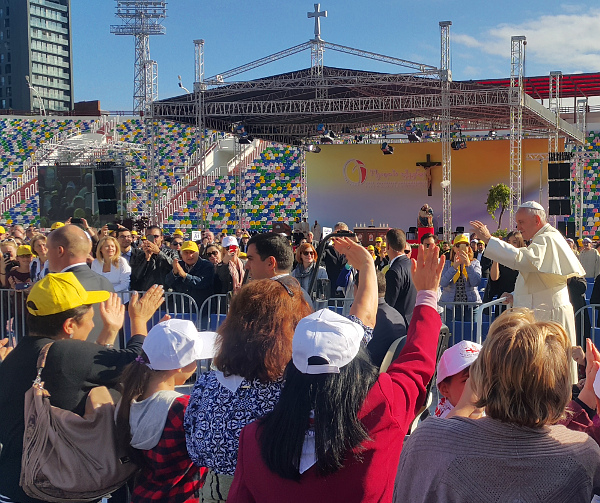 TBILISI, DFWatch–Pope Francis on Saturday conducted a mass on Mikheil Meskhi Stadium in the center of the Georgian capital Tbilisi.

In his sermon, the head of the Roman Catholic Church spoke about the importance of women in Georgia, quoting Mother Teresa, who said that more women show more love of God than men do.

“There are lots of grandmothers and mothers in Georgia who still retain and transfer Saint Nino’s faith in Georgia’s holy land,” he said, and spoke about motherly love, the innocence of children and the love of God.

The holy father’s mass was attended by President Giorgi Margvelashvili and the first lady, members of the government, foreign diplomats and representatives of other religious confessions.

Outside the stadium, a small group of radical Christians demonstrated, holding up anti-pope posters. The demonstrator’s are against the pope’s visit as they believe it’s a threat to the Orthodox Church.

In the second half of the day, Pope Francis was slated to visit Svetitskhoveli Cathedral in Georgia’s historical capital Mtskheta.

On the first day of his visit Friday, the pope met with the president, prime minister, speaker of parliament, foreign diplomats and clergy.

His visit will end on Sunday as he departs for Azerbaijan.