Trump’s NSC advisor: We have to find ways to deal with new threat that Russia has perfected

Trump’s NSC advisor: We have to find ways to deal with new threat that Russia has perfected 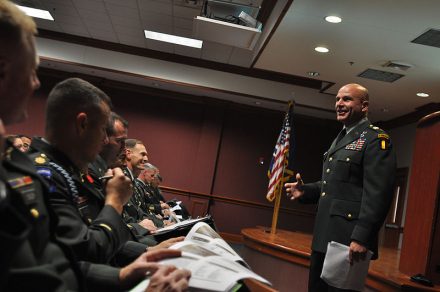 VoA contributor Greta Van Susteren interviewed H.R. McMaster, 26th National Security Advisor, serving under President Donald Trump, at the White House. This is a transcript of a part of the interview pertaining to Russia.

VoA: First of all, do you believe that — you may have said this a million times, I know — that Russia interfered with our election?

McMaster: Yes, of course. The president’s been on the record on that, as well.

McMaster: Well, what we have to do is come up with a way to deal with this very sophisticated strategy, this new kind of threat that Russia has really perfected in a lot of ways, and that’s the use of disinformation and propaganda and social media tools to really polarize societies and pit communities against each other. To weaken their resolve and their commitment. We cover this quite a bit in the National Security Strategy and talk about how important it is for every time we talk about what divides us as country, we have to talk about what unites us. And that’s our … the common commitment to our values. We value individual rights and rule of law, and we value our democracy.

VoA: It’s so insidious when someone sort of creeps into your election, into the debate, or puts false information out there. I mean, it just permeates every community in the country.

McMaster: No, insidious is the right word. So, one of the most important remedies is to pull the curtain back on it to show this activity, to show what the source of this activity is, what the purpose of this activity is. And so doing, you’re going to undercut a lot of their ability to exert that kind of negative influence on our society or others, you know? As you know, the Russians were very active in Europe, as well, in the French election recently, in the Spanish referendum in regards to Catalonia. You see them active in Mexico already. What they did in Montenegro and try to foment a coup, as well as this sort of sophisticated campaign. And so, pulling the curtain back on Russia’s destabilizing behavior, I think, is a very important first step, because once the people … once everybody sees what they’re up to, they lose a lot of their power to foment lack of confidence and to pit communities against each other.

VoA: All right. I take it your counterpart in Russia denies this, denies doing this?

McMaster: Well, I think Russia’s moved from what you might call plausible deniability to implausible deniability. These are the same people who said, ‘Oh no, we didn’t shoot down that airliner or murder all those people. Oh no, we don’t have soldiers in Crimea or in eastern Ukraine.’ I mean, it’s just not credible anymore. We’re not providing cover for a Syrian regime that is committing mass murder of its own people with chemical weapons. And so, it’s just not credible anymore. And so, what we need to do, I think, with Russia, is confront their destabilizing behavior. As I mentioned, pull the curtain back on it.

VoA: But doesn’t Putin deny it?

McMaster: But we also have to deter further conflict with Russia, and what we want to do is find some areas of cooperation. What we have seen recently is, it seems as if Russia will actually act against its interest to spite the United States, the West, our European allies.

VoA: They’re saying if you don’t have any self-preservation, it’s a terrible enemy, in some ways, our opponent.

McMaster: Well, what we’d like to do is find areas where we can cooperate with Russia in areas where our interests overlap. One of those is an area we’ve been talking about, which is in North Korea, another is in Iran. I mean, how can it be in Russia’s interest to help empower Iran across the Middle East? They’re going to pay a huge price for that.

McMaster: So, every state — every Arab state certainly — should recognize what Russia’s been doing. And Russia should pay the price, in terms of its reputation, its access to the region, for what it’s doing to enable Iran and Iran’s very destructive activities perpetuating this fitna, or civil war, across the greater Middle East. And Russia shouldn’t give cover and support to Iran so it can continue its nefarious designs across the region. I mean, not only has Iran continued to support terrorist groups like Hezbollah, all these other illegal armed groups — about 80 percent of the fighters on the side of the Assad regime in Syria are Iranian proxies and in Yemen. And what they’re doing is weaponizing these networks with long-range missiles, as well. And so again, I think pulling the curtain back on it, really asking Russia, ‘How can this be in your interest to aid and abet this Iranian regime?’

VoA: I guess if I thought they responded a lot to shame. But I think the term that’s been used by the Trump administration is they’re a strategic competitor. And in the past — and not just in the past year since President Trump took office — but in the years past is that Putin has gained in strength. This is not someone who seems to have been shamed away like, ‘Oh, I’m really sorry I was involved in the U.S. election, or I’m ashamed.’ He seems to be emboldened by this.

McMaster: Well, he’s also now become one of the most sanctioned countries on Earth. I mean, that can’t be in Russian interest. So, I think it’s important for Russia to conclude that it’s in its interest … Russia is not going to act against its interest. We don’t expect Russia to act against its interest or do the United States, or anybody else, a favor. What we want to do is to be able to find areas of cooperation, so we can help convince Russia that it’s in its interest to work together on some of these key priority threats to the world. I mean, how could it be in Russia’s interest to have the nonproliferation regime break down in Northeast Asia? To see other nations in Northeast Asia armed with nuclear weapons? It’s not in Russia’s interest. You already see South Korea and Japan, and their alliance with us strengthened. You see South Korea and Japan arming at a breakneck pace. And so, this is not in Russia’s interest. And the way to resolve this is to resolve this problem with North Korea and really allow Northeast Asia to enjoy a new era of prosperity. Can you imagine without that threat from North Korea, how Russia, China — everyone — would benefit from that?

VoA: What surprises you most about the job before you took it and now that you’ve been in the seat?

McMaster: Well, what surprised me the most is the high-quality people I get to work with. I mean, these extremely dedicated civil servants and officers from across our government on this National Security Council are tremendous. It is a great privilege to work with them. And then, I guess what surprised me, as well, is the degree to which we are working together based on our common interest with so many nations around the world. I mean, we have great relationships with our counterparts between National Security Councils, National Security Advisers. It’s maybe part support group, but it’s also a group of like-minded nations. They’re trying to advance and protect the interest of our citizens. And we have some … as you were talking about, a lot of problems that we’re working on, but we’re also working on opportunities — opportunities to increase the security and prosperity of all our peoples and of the world.

Van Susteren: General, thank you very much, and good luck. We’ll be watching, and I hope you come back.

McMaster: Thanks, Greta. It’s was a pleasure to be with you. Thank you so much.