Students clash with police over candidate for university assembly

Students clash with police over candidate for university assembly 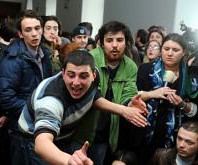 TBILISI, DFWatch–Students clashed with security guards and police at Tbilisi State University on Thursday while trying to prevent the election of a new chancellor of the university senate.

The assembly of the senate had to be canceled. Students continue their protest and plan to spend the night at the university.

The reason for the clashes was the Giorgi Gaprindashvili, candidate for chancellor, is an undesirable person for the students, who claim that he is biased since he has been member of the student council, the self-government (Tvitmartveloba), two times in a row and before 2012 he used to work as a deputy head of the administration. The other reason is that while he served on the council, members of the Tbitmartveloba beat students, who were members of the movement Targmne (translate) in 2011.

Gaprindashvili refused to withdraw his candidacy. The students do not intend to call off the protest as long as he remains a candidate.

Protesters are gathered at the hall of the main university building.

The senate assembly was canceled after students met with the rector of TSU, Lado Papava. The rector offered the students to dissolve their protest and hold an open meeting on Monday with the students, Gaprindashvili and members of the senate. Then on Tuesday hold another meeting, but with members of the Tvitmartveloba and make a decision only after the meetings.

After a while, students decided to reject the proposal. They will wait until Gaprindashvili withdraws his candidacy. They also want him to meet the students — all of them, not just some.

Part of the lecturers joined the student protest and expressed support for them.

Two professors at the Social and Political Sciences Faculty, Manana Shamilishvili and Mari Tsereteli, came to say that they support the students and they never planned to vote for Gaprindashvili and agree that he should withdraw his candidacy.