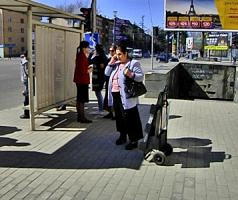 TBILISI, DFWatch–A man attacked a member of Jehovah’s Witnesses in Kutaisi, western Georgia, on Thursday. The inebriated attacker beat him and tore book and, leaflets and smashed the JW stand.

The incident took place on Thursday morning near the former glass factory.

Manuchar Tsimintia, a lawyer representing Jehovah’s Witnesses, told journalists that the man first insulted two women at the stand and then beat them, after which he escaped.

The Interior Ministry is studying the incident, but an investigation has not yet been launched.