Storm continues to cause damage in Georgia

Storm continues to cause damage in Georgia 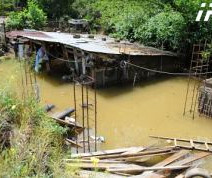 The Gaprinashvili family’s house in Tbilisi was completely destroyed by flood water. (Interpressnews.)

TBILISI, DFWatch–Hailstorm and rain continues to destroy crops, kill poultry and livestock and flood houses in several parts of Georgia.

Last evening, a hailstorm hit the Dusheti region and the flooded river carried away poultry and livestock.

“It was raining with hail for an hour. We cannot remember anything like that over the past years. We are left with no harvest and if the local government doesn’t pay attention, we may die of hunger,” local in the village Gremiskhevi in Dusheti told Interpressnews.

More than 70 percent of the harvest was destroyed in Ateni as well, including grapes, fruits and vegetables. Several roads in the village were damaged.

Two days ago, heavy rain caused problems in the capital as well. There were more than 100 calls to the emergency service, traffic problems, and a family living on Tsknetiskhevi Street is now left without a home. Inga Gaprindashvili said she and her family weren’t able to take anything with them from the house, which was entirely flooded.

Flood water from the river Vere reached the Tamaz Elizbarashvili Dog Shelter, killing more than a dozen dogs and taking away a few tens of them. For the last few days, volunteers have been helping to clean up the shelter.