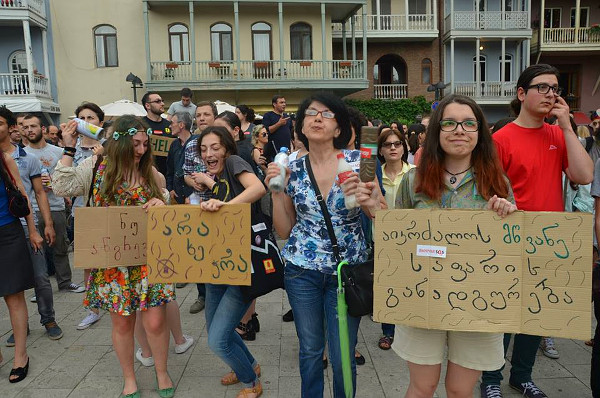 TBILISI, DFWatch–Tbilisians demonstrated Saturday against several construction projects which in their opinion will damage the authenticity of the city, especially in the old districts.

Organizers from Tiflis Hamkari want an urban development policy for Tbilisi to avoid decisions that are ‘anti-social’ and argue that specialists and the general public should be involved in the decision-making process.

Demonstrators gathered at the Tbilisi City Council building on Freedom Square, carrying posters with messages like ‘Protect, restore, don’t damage,’ ‘grow green’, ‘we are fed up’,’what did all the green do to you?’

The demonstration then moved toward the old part of the capital in Abanotubani, where several local bands and singers performed. There was also an exhibition showing the buildings which are under threat of being damaged or destroyed by the new projects.

Among the most criticized projects being planned in Tbilisi are Panorama Tbilisi and the recently approved project on Mirza Shafi Street right behind the Abanotubani district.

Tiflis Hamkari has published this photo gallery on Facebook from Saturday’s demonstration: