Probation official shoots himself in the head

Probation official shoots himself in the head 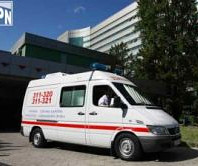 Besik Tskhadadze, head of the National Probation Agency’s Tbilisi bureau, was taken to the Republican Hospital but died shortly after.

Relatives told journalists at the hospital that he had shot himself, but they don’t know whether it was a suicide attempt or negligence.

A spokesperson for the Interior Ministry told DFWatch that there has been opened an investigation based on article 115 of the Criminal Code about bringing someone to the point of suicide.

It is not known what kind of gun was used.

Relatives say Tskhadadze’s wife is currently in the emergency unit after feeling ill.