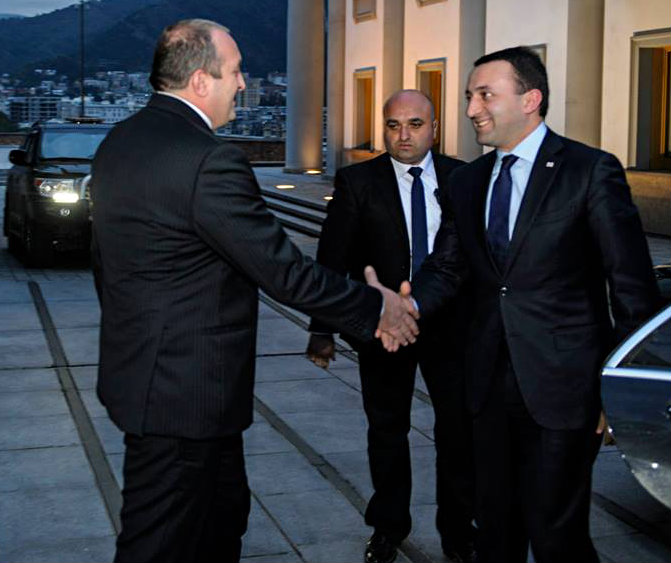 TBILISI, DFWatch–Georgia’s president and prime minister laid their differences to rest on Tuesday and put on big smiles for a session of the National Security Council.

The session was called by President Giorgi Margvelashvili to come up with ideas for how to respond to a recent Russian move to draw breakaway Abkhazia further into its grasp with a proposed broad-sweeping treaty that includes defense. The secretary of the council has called it a Russian attempt to annex Abkhazia, which has been ruled by an internationally unrecognized breakaway regime for more than two decades.

Despite the serious agenda for the meeting, there was a long list of absentees, including the defense minister. This was seen as sign of the tug of war between the president and the prime minister. The latter has created his own security council-like body with almost exactly the same function as the one headed by the president.

The rivalry came to the surface some months ago, after former Prime Minister Bidzina Ivanishvili, the billionaire who brought together the current government coalition, began criticizing Margvelashvili, and was seen for example when the French president visited Tbilisi, and the prime minister refused to attend a dinner with him hosted by the president. Later, the PM insisted that he should sign a free trade agreement with the EU, even though the Constitution clearly states that the president as head of state signs international treaties.

Prime Minister Garibashvili was not expected to come to Tuesday’s session, but when he did, the day turned into what looked like a new found harmony between the two Georgian leaders.

But little substantial was said, and Georgian media was mostly left with quotes about the good mood. Margvelashvili told Imedi TV’s evening news show Kronika that steps were planned for how to respond to the current situation regarding Abkhazia. He said the participants at the session analyzed threats and planned coordinated actions which will be taken by the government, the president and parliament.

Both he and Prime Minister Irakli Garibashvili were smiling broadly as they appeared before the media, deflecting suggestions of any conflict between them. The meeting started with a good handshake and warm kiss as both walked into the palace smiling.

A journalist asked Margvelashvili whether the series of misunderstandings between him and the prime minister now is over, to which he answered: “If everyone is expressing the same opinion, democracy is impossible.”

When it comes to territorial integrity, sovereignty, the future of Abkhazians and Ossetians, there is complete consensus, the president explained. But more dialogue is necessary, he added.