One man dead in building collapse in Zugdidi

One man dead in building collapse in Zugdidi 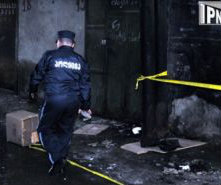 TBILISI, DFWatch–One man died as a result of a building collapse in western Georgia Monday night.

A water reservior burst in the office of the State Security Agency in the town Zugdidi, near the Abkhazian region. The victim is head of department Zviad Lagvilava.

According to the Interior Ministry, when the water reservoir burst, it caused an explosion in the building and the walls collapsed.

Deputy Interior Minister Vakhtang Gomelauri, who visited the site, said it was an accident.

“I want to express my condolences to his family. A water reservoir burst, which was followed by a wall collapse and our employee got caught under the debris, as a result of which he died.”

The body has been sent to Kutaisi.

The Interior Ministry has launched an investigation.