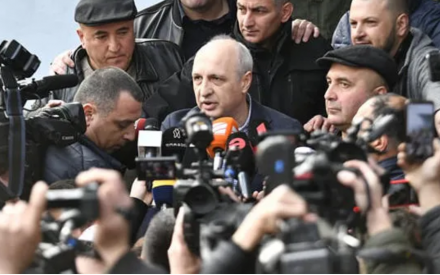 “I ensure you this government will be finished in a year,” said Vano Merabishvili, former PM and ex-minister of interior, on Thursday after release from prison where he served almost seven years.

Merabishvili was an iconic figure in the government led by Mikheil Saakashvili and one of his closest allies. He’s been widely regarded in Georgia as a mastermind of successful reforms and also culprit of many wrongdoings, including flagrant violation of human rights.

“I’ll go to active politics to topple this regime,” Merabishvili said addressing a cheering crowd at the prison gates.

He didn’t however answer a key question which party he’ll join to carry out this task – United National Movement led by Mikheil Saakashvili or European Georgia, which split with the UNM few years ago.

Both UNM and EG welcomed his release.

Vano Merabishvili was arrested few months after power change and charged with various crimes, including the cover-up of the murder of a bank employee in 2006, violent dispersal of anti-government protesters in 2011, and beating a parliamentarian in 2005.

Yet he may face further charges for the raid in Imedi TV in 2007 and the dispersal of another rally on November 7, 2007. Hence, the opposition fears, the government of Bidzina Ivanishvili may any time bring him back to prison, like it did few days ago to Gigi Ugulava, another prominent official during Saakashvili reign.